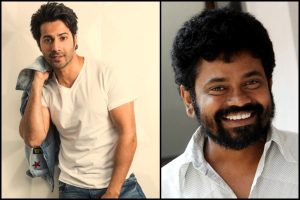 Varun Dhawan To Team Up With Telugu Director Sukumar?

Ace filmmaker Sukumar has set his eyes on Bollywood. Yes, the Rangasthalam director is all set to make a Hindi film which is said to be a remake of South film. Apparently, the director has approached the latest sensation Varun Dhawan to rope in in his film.  Our sources have said that Varun who met the director has evinced interest to work with him.