Punjabi beauty Taapsee got a nationwide acclaim for her latest film Pink. She was appreciated for her acting and also for choosing such kind of brilliant script. Currently, she is acting in yet another female oriented flick called Naam Shabana which is the prequel to superhit film Baby.

Meanwhile, latest buzz reveals that Taapsee has signed another Bollywood film, this time, a commercial one. Apparently, she has been roped into play one of the heroines role in the remake of Judwaa. Judwaa is a super hit film starring Salman Khan, which itself is a remake of Telugu film Hello brother. This remake will be directed by David Dhawan and it will have Varun Dhawan in the lead role. Jacqueline Fernandez will be playing other heroine’s role. Apparently, Taapsee will be seen in the role which was played by Soundarya in the Telugu version and Jacqueline will reprise the role of Ramya Krishna. 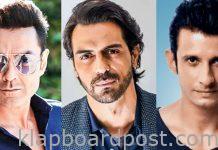 Penthouse is a psychological thriller