Vijay Deverakonda is riding high with being counted as one among the top actors in Telugu cinema in a short span of time. The actor has humongous fan-base among youth whom he fondly addresses “rowdies”. He comes up with his own USP and always strikes a chord with the audience.

Waiting at the bus stop. Still didn't find a shirt that I like. I am you. I am the Rowdy you. www.rowdyclub.in

Vijay recently posted a picture of his shirtless image driving on a Royan Enfield which has evoked a huge response. He posts a quirky caption, apparently suggesting that he would launch his official label Rowdy on July 15.

Going to College!
I still didn't find a Shirt I like.
I am You. I am the Rowdy you.https://t.co/u1zOnmxevq pic.twitter.com/Uq1wNYBSgR

On the work front, Vijay is busy with three films in his palette with NOTA, Geetha Govindam and Taxiwala. Explaining how he bagged bilingual film NOTA happened, Vijay said, “Gnan kept telling me that there is a good script by Anand Shankar and listen to it once. I thought let me just listen to it even though I didn’t have any intention of doing it, and I met Anand. And when I met him for the first time, I was shooting continuously and was dead tired, and hence could not focus on his narration. And I asked Anand if he could meet later again for the narration. And this time I was all prepared for it. After the end of the narration, I loved it so much that I called Gnan and told him we are doing it.” 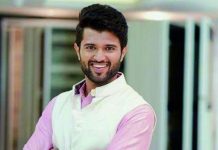 This hero set for a solid comeback