Akash Ambani‘s engagement with Shloka Mehta was a glitzy affair. The pictures of Bollywood celebrities gracing the occasion are doing the rounds in social media and among them, one picture of adorable ‘girl gang’ caught our attention.

The picture shows Aishwarya Rai Bachchan with his daughter Aaradhya and Navya Naveli Nanda from the Ambani engagement bash is breaking the internet. All the three ladies clad in the best-shining couture are dazzling no less than a star. Actor Abhishek Bachchan shared the picture of the three women in his life captioning as “my girls”. The picture has been liked by over 2 lakh people.

On the work front, Abhishek after a sabbatical period of two years will be seen in Anurag Kashyap’s Manmarziyaan which also has Taapsee Pannu and Vicky Kaushal. Aishwarya on the other side is in Fanney Khan starring Anil Kapoor and Rajkumar Rao. The film is the remake of hit Belgian film Everybody’s Famous. 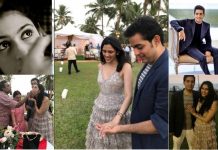