Jr NTR‘s Aravinda Sametha Veera Raghava is gearing up for release on October 10. Helmed by Trivikram Srinivas, the film is currently in post production stage and is one of the most talked about project this year. Film critic and UAE Censor Board member Umair Sandhu has released an interesting tidbit about Jr NTR’s film. In his tweet he called the film to be another “mass entertainer”  and “Jr NTR is back with bang”.

Final Editing & Post Production Done of #AravindhaSametha ! Full on Mass Entertainer on the way. #JrNTR is Back with Bang 👌👌👏

Earlier, the maker released the first lyrical track from the film titled Anaganaganaga which has got overwhelming response. The film is bankrolled by Haarika and Hassine Creations which has Pooja Hegde in the female lead. NTR has toned his body and flaunted chiselled abs which was very evident in the first look poster. His last outing Jai Lava Kusa was a massive hit and considered that Trivikarm and NTR collaborated for the first time, expectations are high with the film. Moreover, Trivikram’s last film Agnyaathavaasi starring Pawan Kalyan was the box-office disaster, so all eyes are on Maatalu Mantrikudu. 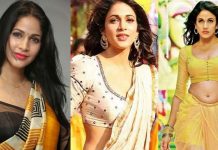 Vijay Deverakonda on not working in Hindi films