Telangana IT and Municipal Administration and Urban Development (MAUD) Minister KT Rama Rao is celebrating his birthday on July 24. And despite, KTR has asked party cadre among others to refrain from erecting banners and hoardings, a KTR birthday video is doing the rounds on social media. The video titled Vachadu Vachadu Oka Leader is paid tribute by Mayor Banthu Ram Mohan. The lyrics has been penned by Kandikonda, while noted Bollywood singer Kailash Kher has lent his vocals. Check out the song: 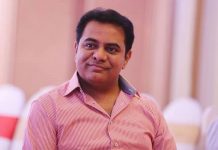