Telangana Rashtra Samiti Working President, K Taraka Ramarao (KTR) have made sharp comments after Jana Sena chief Pawan Kalyan’s recent remarks that AP public are getting beaten up in Telangana, adding there’s no safety to them. 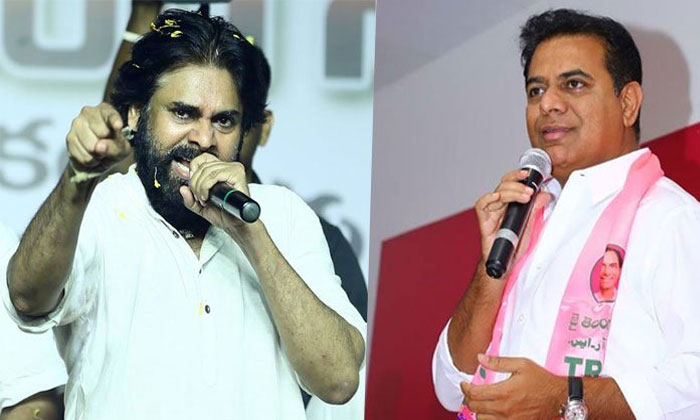 “Pawan Kalyan’s farmhouse is here (Telangana). He is living here and also put up candidates here. He can come and campaign here. One year back, he heaped praises on KCR saying that there is peace and harmony prevailing here. What happened all of sudden now? Since we have done well, even Andhra origin settlers have voted for us,” KTR tweeted.

However, PK followers swarmed in support for him and asked KTR to check the fact stating that he was misquoted by the ABN new channel.  “His words are misleaded by ABN sir. Please do watch the full video and come to conclusion. thank you! Another fan named Sushma tweeted, “Sir, You were the ones who banned Tv9 and ABN in Telangana previously right!! How come you consider their negative propoganda now?

It just takes two minutes to see the video before replying to a propoganda article. pic.twitter.com/1dRJk4KiKd

Sir, You were the ones who banned Tv9 and ABN in Telangana previously right!!
How come you consider their negative propoganda now?