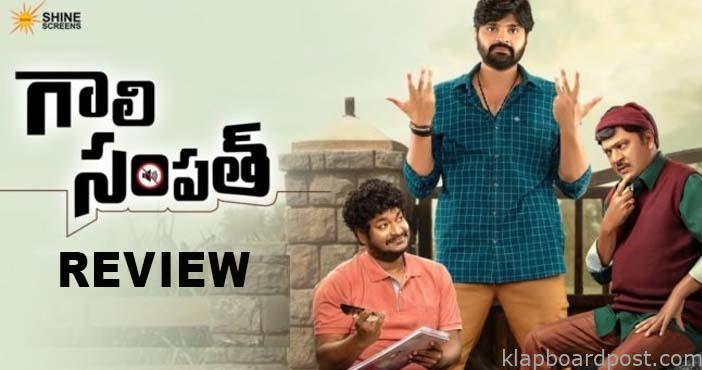 Gaali Sampath is Anil Ravipudi’s first production and he has also given the story. The film which has Rajendra Prasad and Sree Vishnu in lead roles is out now. Read our review to know whether the film has any juice in it or not.

The film is set in Araku and is about a man called Gaali Sampath. He is mute and always dreams of becoming an actor. On the other hand, his son, Soori(Sree Vishnu) is a simple guy whose dream gets shattered because of his dad’s crazy wish. Upon this, the father and son get into a tussle and Gaali Sampath ends up falling into a pit. How does he come out and makes peace with his son is the story of Gaali Sampath.

Gaali Sampath is an out-and-out Rajendra Prasad film. The senior actor breaths life into the role of a mute. His character is also nicely established at the beginning of the film. The manner in which comedian Satya is used to let people understand what Gaali Sampath says is thought of well and the comedian also does a good job.

Sree Vishnu does not get much screen time but he delivers a superb performance. Sree Vishnu is particularly amazing in the emotional scenes and we wish he should have got more time to show his talent.

The film has a very basic storyline of a father and son and how they have issues The conflict point between the father and son is also neatly brought into the frame. But the makers take a lot of time to elevate the role of Gaali Sampath. There are so many scenes that showcase the issues of Gaali Sampath and how he tries to speak. Things get repeated during this time and after a lot of struggle, the film comes to a breakpoint with a god interval twist.

But from there many would get a feeling that the film will get interesting but that does not happen at all. The routine emotions, drama, and silly scenes get on to the nerves of the audience. The film does not make sense as various logics go for a toss. The music is not that great and the BGM is overdramatic. But the Araku visuals are very good and give a nice feeling

Rajendra Prasad tries hard and too much time is given to him leaving Sree Vishnu alone. This makes things dull and gives the feeling of watching the film from the ’90s. In a nutshell, Gaali Sampath is a routine father-son film trying to be different but it really isn’t and ends up as a dull outing.