Sonam Kapoor and Anand Ahuja’s wedding was one helluva grand affair that was look forwarded by industry people and her followers. The two enter into wedlock on May 8 this year. The couple keeps sharing sweet exchange on their respective social media handle giving couple goals. 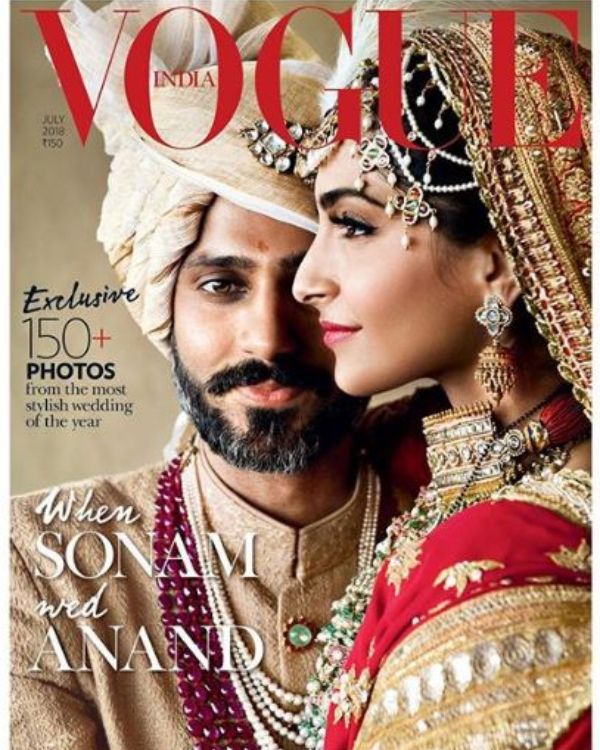 Sonam and her darling husband are back in the news as the two have recently graced the cover page on leading magazine Vogue. The special edition of Sonam gives us some exclusive pictures of Sonam’s wedding and what she has to say about Anand.

Thanking the magazine’s team, Sonam posted on her Instagram, “Thank you Shalini for this beautifully written piece. I love the way you’ve articulated our journey and we are forever grateful to you and the entire Vogue team.”

Have a look at the pictures:

Thank you Shalini for this beautifully written piece. I love the way you’ve articulated our journey and we are forever grateful to you and the entire Vogue team. @shallfall @anandahuja #EverydayPhenomenal 💫 @anandahuja For @VogueIndia

Recalling my first date “I was apparently wearing the worst sneakers he had ever seen. I keep telling him that he fell in love with me despite my bad sneaker game… That day, walking and talking in London, I knew he was the love of my life.” #EverydayPhenomenal 💫 @anandahuja For @VogueIndia

“Anand is so encouraging when it comes to my work that he didn’t blink when I told him I was flying to Cannes two days after the wedding or that I was getting into promotions straightaway. There was no argument, just acceptance—you gotta do what you gotta do.” #EverydayPhenomenal 💫 @anandahuja For @VogueIndia

Sonam’s last release Veere Di Wedding, a women-centric film raked in moolah at the box-office. She will be next seen in Ek Ladki Ko Dekha which stars her father Anil Kapoor and Juhi Chawla.

Shocking! Prabhas Smashes These Many Cars In Saaho