Meanwhile, the state government has not budge with the strike continued on the 14th day on Friday and no imminent end appeared in sight, despite the case coming up for hearing in the High Court and the intervention by Governor Tamilisai Soundararajan. More than 48,000 employees, who continued to stay away from work, are gearing up for Saturday”s shutdown. All opposition parties, people’s organizations, trade unions and student bodies have declared support to the shutdown call. The shutdown is expected to affect the normal life, especially in Hyderabad as Ola and Uber cab drivers have also decided to go an indefinite strike from Saturday to press for their demands to regularise the cab aggregator market. Since the beginning of strike by the TSRTC employees on October 5, people were relying heavily on cabs for travel. 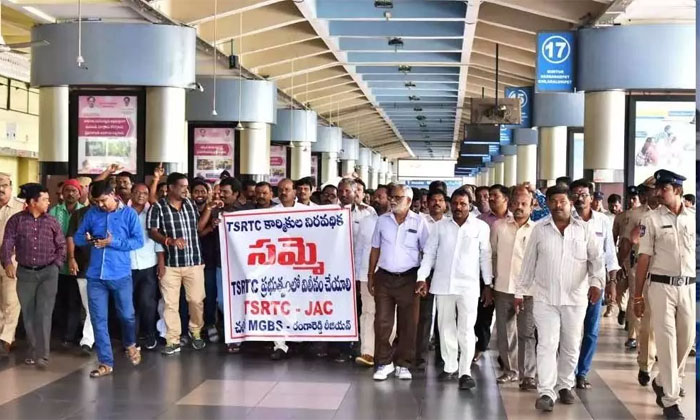 The High Court, which resumed hearing on Public Interest Litigations (PILs) on the strike on Friday, once again suggested to TSRTC management to immediately begin the talks with the striking employees and inform the court of the measures taken. The division bench headed by Chief Justice R. S. Chauhan adjourned the hearing to October 28. It asked the government as to why it failed to appoint the Managing Director of TSRTC. The government cited the financial problems faced by the transport utility. While the government once again outlined before the bench the steps taken by it to make alternate arrangements to minimize the inconvenience to people, the court noted that the continuing strike is adding to the woes of the commuters.

Joint Action Committee (JAC) of the striking employees told the court that neither the government nor the TSRTC management invited it for talks. JAC Convenor Ashwathama Reddy told reporters that the strike was continuing and they would go ahead with the protest plans announced earlier. He reiterated that JAC is ready for talks. Though the government has ruled out the TSRTC”s merger with the government, Reddy said talks would cover all 26 demands. There was no headway in breaking the impasse despite the intervention by Governor Soundararajan, who on Thursday called Transport Minister P. Ajay Kumar to know the arrangements made to ease the difficulty caused to commuters due to the strike.

Ajay Kumar deputed Transport Principal secretary Sunil Sharma to Raj Bhavan, who explained to her the alternate arrangements made. The Governor”s move came after a delegation of BJP leaders called on her to complain that the continuing strike and the government”s failure to address the employees” issues was causing severe inconvenience to people. The strike already saw two employees committing suicide allegedly due to the tough stand taken by the government. Chief Minister K. Chandrashekhar Rao had already announced that 48,000 employees dismissed themselves by not joining the duties before the expiry of the deadline. He ruled out talks with the striking employees and asked officials to not only recruit temporary employees but also hire more private buses.

TSRTC claims to be operating 75 per cent of buses services. The government remained confident of restoring normal operations by October 21 when the educational institutions will re-open after extended Dasara holidays. The government, which extended the holidays for schools and colleges by a week, came under flak for adopting an “adamant” attitude on the demands by the employees. JAC leader Ashwathama Reddy has even warned that the Chief Minister”s attitude could lead to a constitutional crisis.