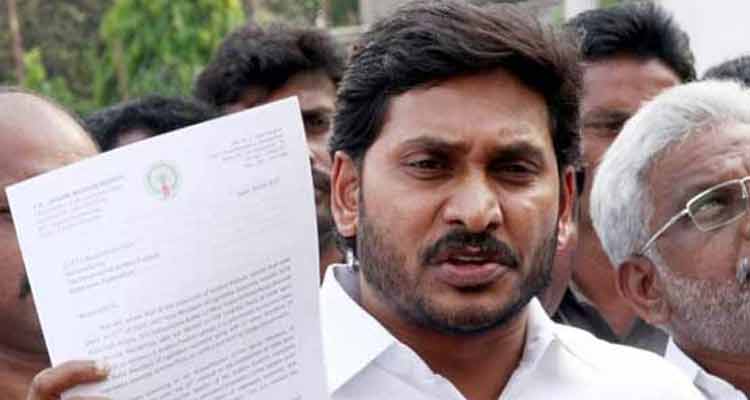 “If we are not given special status by 5th of April, our MPs will resign by April 6 2018” YSRCP Chief Jagan Mohan Reddy announces during his padyatra in Kaligiri, Nellore district of Andhra Pradesh while addressing a public gathering.

Demanding special status for Andhra Pradesh, the YSR Congress Party (YSRCP) will launch a nation wide campaign, ‘HODHA MANA HAKKU, PACKAGE THO MOSAPOVADDU’ pledging that YSRCP will not compromise until the state receives Special Category Status. The party is of the opinion that Special Category Status is the right and wait of every Andhrite since the bifurcation of state

YSRCP leaders along with distressed Andhrites will siege collectorates in each district across AP and a dharna in Parliament, Delhi demanding Special Category Status for AP.

The campaign will siege collectorate’s in all 13 districts of Andhra Pradesh on 1st March 2018 and will also hold a protest in CMs Office in Vijayawada. March 1st has been chosen as the then President of India Shri. Pranab Mukherjee attested the bifurcation of the State in 2014 on 1st March 2014.

On 5th March 2018, YSRCP MPs will lead a march of more then thousand Andhrites from Ektha Sthal to the Parliament for a protest before the Parliament house demanding SCS. The march will start after paying respects to the late PM Shri. PV Narasimha Rao’s memorial at Ekta Sthal.

Through the ‘HODHA MANA HAKKU, PACKAGE THO MOSAPOVADDU’ campaign, the Telugu Diaspora will manifest their agony and anger on the compromise by present government to the state in the form of Special Package in place of Special Status.