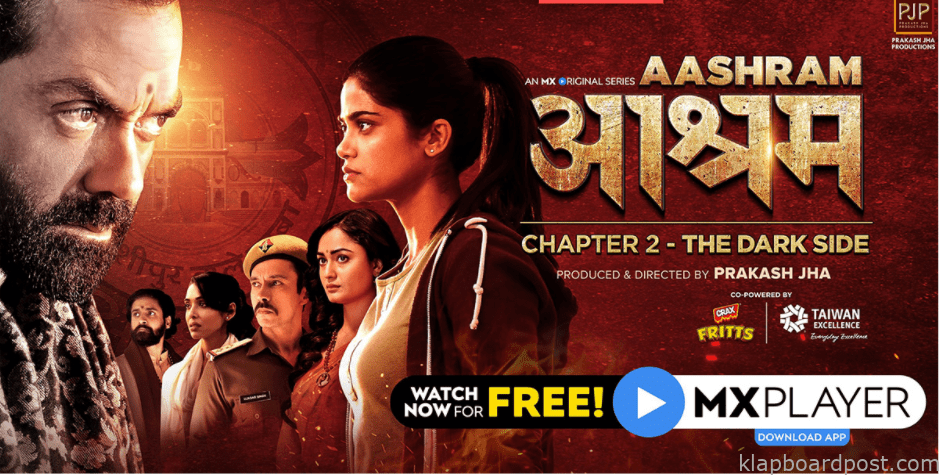 We already knew that the first season of ‘Aashram’ has hugely disappointed the audience with its ending. The makers have now come up with the second season of the web series. Directed by Prakash Jha, Bobby Deol, Aaditi Pohankar, Chandan Roy Sanyal, Darshan Kumaar, Anupriya Goenka played crucial roles in this web series. Touted to be a crime drama, the web series has nine episodes and got released. After a long wait, the web series has finally released today on 13th November 2020 on MX Player.

Plot:
Kashipur Wale Baba Nirala (Bobby Deol) is an Indian godman who joins hands with some corrupt politicians from his region and tries to clasp the power. He is a cruel person who secretly does notorious deeds like murders, castrations of men, doping the women devotees, and raping them. Pammi (Aditi), who is also a victim of his cruelty, sets out to take revenge in this second chapter.

Actors & Performances:
Despite having a star cast, none of the actors deliver their best performances, which is undoubtedly the biggest disappointment. In fact, Bobby Deol’s performance is also a minus point for the series. Aditi, as Pammi, did a decent job when compared to the other actors. She is a perfect fit for the role and breathes life into her character. Chandan Roy Sanyal and Darshan Kumar also performed well in the film. Anupriya Goenka acted well. The rest of the actors also made their presence felt. The performances are a big letdown for chapter one, and the show’s creators failed to realize the same.

Analysis:
Despite getting released amid high expectations, the second season of ‘Aashram’ web series came out as a complete disappointment for the audience. Be it the performances, music, story writing, or the narration, everything about the web series has failed to impress the audience. Every character is extremely irritating and will not perform anything.

Though Bobby Deol’s character is showcased as a cruel Babaji, the police keep on investigating but cannot find him. In the end, only the audience will become the victims of the series. The entire story can be wrapped up in just two episodes. The makers have dragged it into 9 episodes, which made it an overstretched boring drama and vaporized the entire essence of the story.

Though some of the actors succeeded in grabbing the attention with their performances, the screenwriting is extremely miserable, and not even a single scene in the series is gripping. Chapter one ended on a disappointing note. Chapter one gave boredom with extended subplots and unnecessary sequences. Chapter two also never looks like tying the loose ends and goes on giving more boredom. Overall, ‘Aashram: Chapter 2’ is a boring drama, and it is better to skip it.