‘Stories have the potential to unite us in a world that’s battling isolation’ reads a line at the end of Voot Select’s latest web series The Gone Game, directed by Nikhil Nagesh Bhat.  The statement holds great significance in the context of a superbly crafted series that has been shot entirely during the lockdown in the confines of the homes of its lead cast. The intelligently scripted thriller brings together an ensemble cast comprising Arjun Mathur, Indraneil Sengupta, Shweta Tripathi, Sanjay Kapoor, Shriya Pilgaonkar, Rukhsar Rehman and Lubna Salim, whose commendable performances backed by excellent technical precision leave you gasping for breath.

The pandemic has an integral role to play in the story. The Gujrals, stuck in different parts of the country during the lockdown, are jolted to realise that one of their younger family memebers Sahil, after returning from a trip to Bangkok, has just tested positive for the Coronavirus. Their world turns topsy-turvy when his better half Suhani and the family are informed of his passing away owing to the virus. However, there’s more to this death than meets the eye and the anxieties of the family are further confirmed, as a series of revelations deepen the mystery surrounding Sahil’s life. Sahil’s sister Amara and father Rajeev leave no stone unturned to dig out uncomfortable truths about Suhani and a family friend Deepak, but little do they realise they’ve been tricked smartly and meticulously. 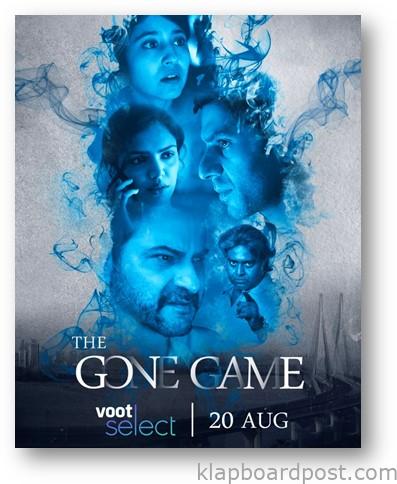 Shot across four episodes that last half an hour each, The Gone Game proves that lockdown needn’t obstruct the creative juices of the entertainment industry. The excellent filmmaking standards could well pave a path for many such efforts to be made in the future on similar lines sans creative compromises. Despite being confined to four walls, the visual appeal of the show isn’t reduced any bit and leaves no scope for any redundancy to creep in owing to the surroundings. Be it Ayan De’s sound design, the compelling background score by Aditya N and Nayantara Bhatkal and the slick editing (Manish Mistry, Rajesh Pandey and Amit Kumar), the technical standards of the show belong to another league altogether, in the context of the limitations under which they have pulled this off.

The real winner apart from the filmmaking and the technical aspects of the show is its emotional hook; The Gone Game makes you invest in the characters. Every part comes with distinct, well-established traits that aren’t included for face value alone and go a long way in taking the story forward, be it Amara’s inquisitiveness or Suhani’s love for social media or Rajeev’s monetary woes/weakness for women.  The plot is not only relevant for the times, but is packaged with a fine mix of twists and turns that leaves you wanting for more. The pandemic scenario is well utilised to set up the crime thriller backdrop and the filmmaker uses the tension, the limitations during the lockdown to add drama to the storytelling with great tact.

Sanjay Kapoor sleepwalks through the role of a doting father who has own set of weaknesses, vulnerabilities and needless to say, is aptly cast for the part. It’s Arjun Mathur and Shweta Tripathi Sharma who liven up the show with their sparkling, intense acts and ring in the right amount of tension at opportune moments, while the likes of Shriya Pilgaonkar and Indraneil Sengupta are extremely convincing while they last. Rukhsar Rehman mostly wears a constant expression of fear and Dibyendu Bhattacharya, as the creepy advocate, continues from where he left in the Netflix show Selection Day as the wily underworld kingpin.

Some may have fingers to point out at minimalism in the plot and the execution, but it’s important to look at The Gone Game as a show for which a team utilised an unlikely opportunity presented by a crisis to make something worthy of our time. Writers Radhika Anand, Nikhil Nagesh Bhat, Mautik Tolia and Ayesha Said respect the viewer’s quest for quality and keep the surprises coming. Make time for The Gone Game this weekend!

After NTR, it’s KCR for RGV