The NTR biopic audio launch and the trailer release was held with much pomp and show at the JRC Conventions in Hyderabad. While the even had many important dignitaries from the film industry but it was Mohan Babu and Rakul Preet’s frank speech that led to netizens have a field day. The clips of Mohan Babu and Rakul Preet’s speech are viral and has also irked Balakrishna who is seen suppressing his anger on the dais. 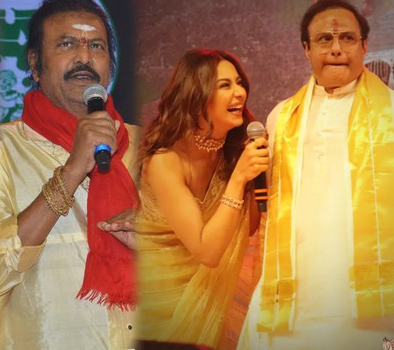 Rakul Preet in her speech started off thanking Balkairshnafor giving her the opportunity to play as late Sridevi and thanked Krish for believing in her. Later she says, “In his reel life, Balakrishna garu never acted with Sridevi but he fulfilled his dream of acting with her in NTR biopic.” She further adds, “Balakrishna garu asked me to say this on the stage.” Upon hearing this Balakrishna is shocked and apparently controls his anger.

Mohan Babu speaking about the greatness of Sr. NTR adds, “Krish did a wonderful job. I don’t know, where the film starts and where it ends. Also, I am not sure if you have projected good persons as baddies or baddies as good persons. But, all the best to you.”

We wonder how Balayya Babu would have reacted personally to Rakul and Mohan Babu. Whether had he made them realised about their mistake or Balayya remained silent is yet-to-be-known.

Mahesh’s next gets a release date!