Telangana Chief Minister K. Chandrashekhar Rao and YSR Congress Party president Y S. Jagan Mohan Reddy, who is set to take oath as the Chief Minister of Andhra Pradesh next week, met here on Saturday and decided to work together for mutual benefit of both Telugu states.

With his bitter rival N. Chandrababu Naidu out of power in Andhra Pradesh, Chandrashekhar Rao extended hand of friendship to his successor Jagan Mohan Reddy. Jagan Reddy, whose party stormed to power with a landslide victory on Thursday, was accorded warm at Pragati Bhavan, the official residence of Telangana Chief Minister. 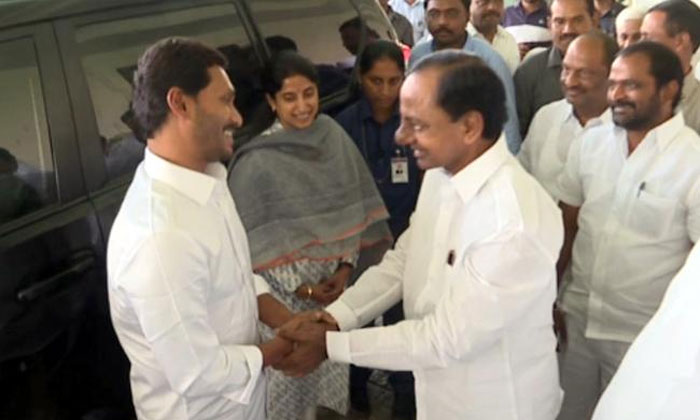 KCR, as Telangana Chief Minister is popularly known, warmly hugged Jagan Reddy to congratulate him on the resounding victory in the Assembly and Lok Sabha elections. The Telangana Rashtra Samithi (TRS) chief also offered a bouquet and sweets to the YSRCP chief. Jagan Reddy also invited KCR for his swearing-in-ceremony, to be held at Vijayawada on May 30. The two leaders discussed the latest political developments and decided to work together to amicably solve all outstanding issues between the two Telugu states.

According to a statement from Telangana CM’s office, KCR made it clear that the policy of Telangana is to maintain cordial relations with neighboring states in a give and take manner, and same would be followed in case of Andhra Pradesh also. The TRS chief said that, if only the River Godavari and the River Krishna waters are used effectively, then both the states would prosper in all aspects. “Right from the beginning it has been our intention to maintain cordial and friendly relations with neighbouring states,” said KCR.

The TRS chief recalled that he personally went to Maharashtra to meet his counterpart Devendra Fadnavis and took the initiative to solve water disputes between the two states. “With this, Maharashtra came forward to cooperate. As a result, we are able to construct Kaleshwaram and other projects. Our policy would be to maintain similar relations with the present Andhra Pradesh state also. Let us act in a such a manner so that both the States are benefitted,” KCR told Jagan Mohan Reddy.

“From River Godavari about 3,500 TMC of water every year is flowing in to the sea. Telangana state can make use of a maximum of 700-800 TMC of water only. Rest of the water Andhra Pradesh can make use of. Water from Godavari River may be diverted through gravity through Prakasham Barrage to Somasila project. With this the entire Rayalaseema could be converted into fertile fields. With just two lifts, the Godavari’s water could be supplied to Rayalaseema,” he suggested. Both the leaders have agreed to have a meeting of officers of both states to discuss these issues. KCR also introduced Jagan Reddy to his cabinet colleagues and TRS leaders. KCR’s son and TRS Working President K. T. Rama Rao and other family members welcomed Jagan and his wife Y.S. Bharathi.