Home English Big Stories Sankranthi battle for grabbing eyeballs begins
Sankranthi is the season for the best business in Tollywood. Hence, most producers time their releases to coincide with Sankranthi festive holiday season. This time too, as many as four films are hitting the marquee during the Sankranthi season. 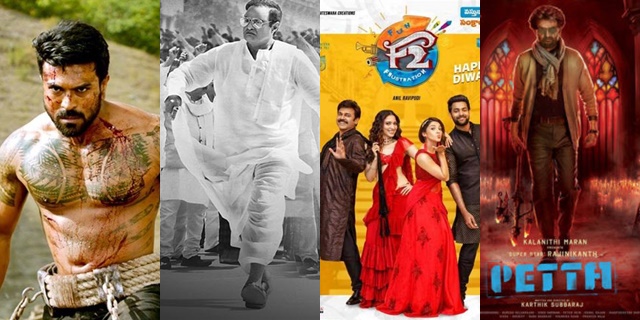 NTR biopic is releasing on January 9, while Petta is releasing on January 10. Vinaya Vidheya Rama is releasing on January 11 and F2 will release on January 12. All of them are releasing before the actual festival, so their fate would be known by the time the festive mood sets in.
With the reviews and reports out, the viewers can make their choice. Whichever gets a weak talk, will sink like Titanic. Only those that get a positive talk will rake in the moolah.  If the talk is not good, even films like Agnyathavaasi, released last Sankranthi and 1 Nenokkadine, released the year before, have bombed despite ensemble cast. But each of the four producer is confident that his film will do well. Let’s see who emerges the winner this Sankranthi