The festive time for Power star fans has started. Though it was confirmed that the teaser release of his upcoming film Katama Rayudu postponed to January 26th, The makers have decided to entertain fans with a bunch of posters.

The team is planning to release Sankranthi themed posters of the film during this festive weekend. Today, they have released the poster where Pawan is seen in a fierce look. Apparently, makers will release another poster of Pawan and bulls in the background, tomorrow. 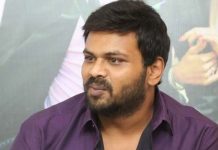