Actress Sri Reddy who started her fight against casting couch in the showbiz has now spilled beans on her break up with her Punjabi boyfriend Ekam Bawa. In her Facebook post, she didn’t name him but made alluding comments that the two have parted ways. She shared about the fonds memories they had and she promised to safeguard their love for a lifetime. Have a look at her post: 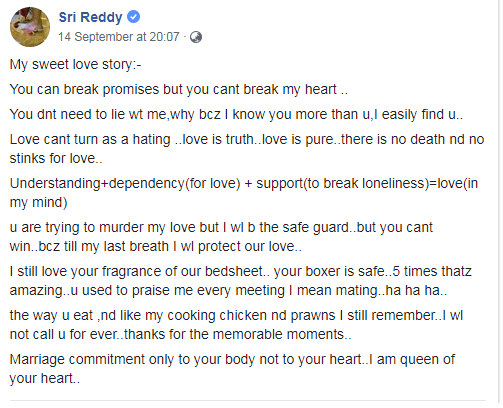 In the past, on her Facebook post, Sri Reddy posted, “Every one asked me to sleep wt them..but ekam bawa asked me,wl u marry me..in my bad times also he is giving the best strength..hats off to this guy#Superb Punjabi guts,”

He is my Boyfriend. Thank u so much for the Love darling. I Never forget ur support. #Srireddy @sri_mallidi pic.twitter.com/m9wl9Q9EP8

Sri Reddy has voiced against the casting couch in Tollywood and trained guns at several known celebrities. Recently, she accused Sachin Tendulkar and director Raghavendra Rao. In the past, she had accused choreographer-turned-director Raghava Lawrence yet again. Earlier, she had accused him of sexually exploiting promising her a role in film. Now confirming her statement, she released a whats App chat she had with one of her fans who had confirmed stating that he has seen Raghava Lawrence of bringing girls to resorts in Chennai for seeking pleasure. The actress posted the chat on her Facebook account. ” Hii Sri, Your rocking. Everybody knows about Raghava Lawrence and so his tactics won’t work here.  I myself have seen him with girls at a resort staying in Chennai,” the message reads.