After Chiranjeevi, Pawan Kalyan and Sai Dhara Tej, one more Mega hero has arrived to wish the fans a very happy new year. He is none other than Varun Tej. Varun made his debut with Mukunda but got appreciated for his national award-winning second film Kanche. After that, he acted in Puri Jagannath’s Loafer. Currently, he is working for Shekhar Kammula’s Fidaa and Sreenu Vaitla’s Mister.

The teaser and first look poster of Mister were released today by the makers. Varun looks damn cool and stylish in the film. It looks like Hebah Patel plays the role of a modern urban girl and Lavanya Tripathi plays the role of a village girl. The teaser looks beautiful and it’s visually very appealing. Looks like Sreenu Vaitla moved out of his mainstream slapstick comedy entertainers and made a pure love story. It reminds you of director’s earlier works like Nee Kosam and Aanandam. 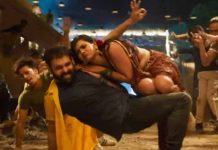 Anushka To Produce Another 3 Films Under Her Home Banner