It is a rural setting, it is a road and there is darkness. A teenager (Praveen) runs away from home for failing examination twice, he cannot face his alcoholic father and his abuse and also the helplessness in finding a solution makes him stand in the middle of the road asking a lorry driver (Jay Prakash) for a lift. The indignation is visible and also the underlying affection when he tells the driver he wants to make something of himself some day and return to buy alcohol for him with his money. We usually hear of young blood swearing never to return. The crossroads is a film of positivity. One doesn’t need education, universities and harmony in the surroundings to teach us humanity and values while growing up. It is life, the experience teaches us how to behave. The driver could be a child trafficker or an abuser; but before he takes a hit, his one compassionate act of feeding the hungry lad allows the audience to interpret the moral thought. The poker faced expression of the child doesn’t matter but the intangible acts act as a catalyst in winding the story to a close soon. The lorry driver’s wife played by Rohini gets the best character in showing compassion for the boy, concern for her old mother in law and finally when it comes to her understanding of her husband, it is a moment that connects us emotionally. It appears that she got all her answers. The characters are over simplistic but the emotions are heavy. The lorry driver’s story exemplifies guilt, empathy, forgiveness and resilience. You couldn’t have added a scene more to the story. The story is by Siva Ananth and the film is directed by Sarjun. 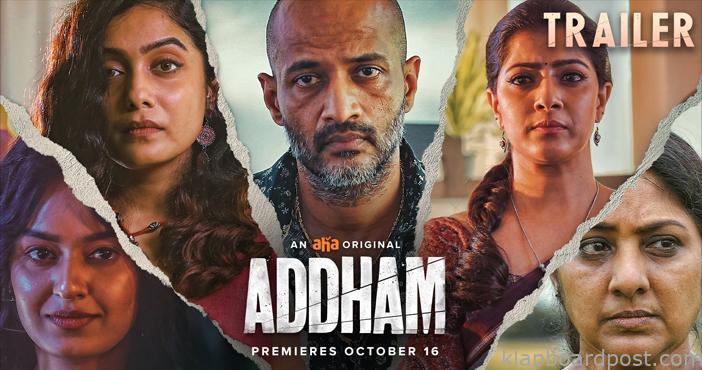 The Cross Roads by Barath Neelakantan has three characters as well and they are played by Prasanna, Abhirami Iyer and Pavitra. Shot in an urban milieu, the dialogues thrown at each other are as loud and unsettling as their estranged relationship. It appears artificial too and gives you a feeling that it is written for high society infidel couples who fantasise someone else when in the company of their spouse. A husband has had enough, drives out of his home and heads to a bar to drown himself and gets chatty with the bartender. He is waiting for a female company either as a rebound or he is heavily complexed. As he finds one, he gets a text message from his wife which is apparently a sign of rapprochement. The banter between the stranger and him gives him a far bigger high than his drink. Somehow the characters, situations and dialogues sound and look farcical and complex like their relationships. It also shows how vulnerable, weak humans are and constantly seek reassurance that they are good, fine and better placed. Also, this mirror in the film is a reflection of people who actually are strangers to their spouses despite living with them for years but strike an immediate, easy and an endearing rapport with absolute strangers. The bartender and the companion give a perspective and a philosophy of their own. The latter gets intelligent lines but somehow this one is not the cross roads that one really wants to be in. 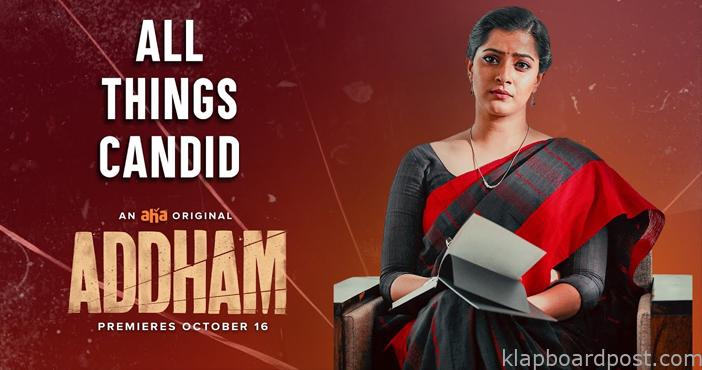 The last is a Secret that stars Varalakshmi Sarath Kumar and Kishore. A doctor of mental health or she is perhaps a psychologist has an unlikely patient who empties his heart and soul to her. He had apparently injured a woman by driving rashly and is sure that she has been killed. He has risen from his background to riches but the guilt isn’t leaving him. Obviously he seeks a closure, but that closure isn’t for him alone. We don’t understand why the doctor is so angry and calls her patient a rich bastard and later appears to be behaving in an extenuating circumstance. This one has a very nice ending and the story is indeed fresh and has been executed that way. The conversations keep us engaged and everyone seems to arrive here at a workable solution. Siva’s characters have a charm of their own and are able to do their best within the limits of the narrative. What works best for Addham is the swiftness with which the stories have been told, the crisp dialogues and the performances which complement the stories. The producers could have easily added a fourth story. Addham is technically well executed, doesn’t make you restless, it is a breeze and a perfect OTT platter.