Actress Jyothika’s fan-following ever growing and Lakshmi Manchu is the latest who is awestruck of the Tamil actress.  Lakshmi took to Twitter to say that she is a big fan of Jyothika adding, her eyes speaks volumes.

Working w #jyothika… woah!! What a talent. Always been a huge fan now even more. Her eyes speak volumes and the camera just loves her #kaatrinmozhi @Suriya_offl

Lakshmi Manchu is working with Jyothika on Kaatrin Mozhi, which is the official remake of Hindi film Tumhari Sulu, that had Vidya Balan.  Kaatrin Mozhi is directed by Radhamohan and bankrolled by Dhananjayan Govind’s BOFTA Media Works. 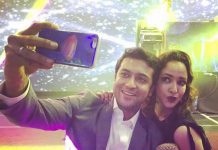 Keep Me In Your Favourite List: Suriya To Lakshmi Manchu