Telangana State Road Transport Corporation (TSRTC) employees Joint Action Committee (JAC) convenor, Ashwathama Reddy, who was on an indefinite strike at his residence was arrested today, November 17. He was taken into custody by police at Urmila Nagar area on the outskirts of Hyderabad and shifted to government-run Osmania Hospital.

There was tension as Reddy’s family members and other TSRTC leaders tried to resist the police. The police took the action after Reddy”s condition started deteriorating. Doctors, who had earlier examined Reddy, had advised him to end the fast. He, however, refused to end the fast till the state government comes forward to hold talks with the striking employees on their demands. Reddy had launched the fast at his residence on Saturday after police refused to grant him permission to undertake the fast at Indira Park in the city centre. 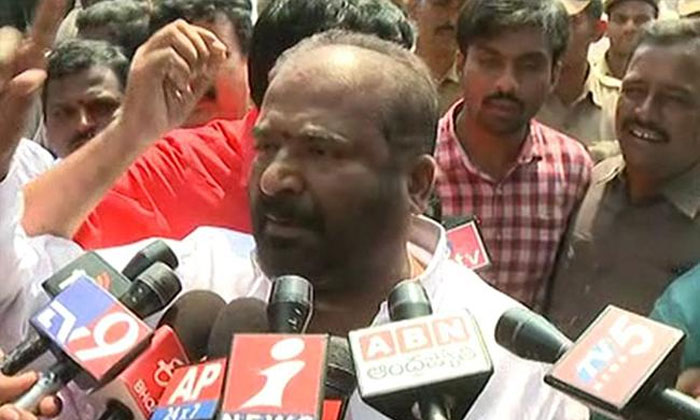 Earlier, police also arrested JAC co-convenor Raji Reddy from his residence in L.B. Nagar in the city. He too was on indefinite fast since Saturday. JAC leaders alleged that police broke open into Raji Reddy’s house as he had locked himself from inside. Policemen bodily lifted him to a waiting vehicle and whisked him away. Police also arrested Manda Krishna Madiga, leader of Madiga Reservation Porata Samithi (MRPS), which had called for a sit-in at Indira Park in support of striking employees. Police had refused permission for the protest.

Manda Krishna was picked up from a lodge in Habsiguda. He told reporters that the government is resorting to undemocratic means to deal with the strike. Police had sealed few routes and imposed restrictions on some others to prevent MRPS activists from reaching Indira Park. Check posts were formed at various points in the city and additional forces were deployed to foil the protest. The indefinite strike by over 48,000 employees entered 44th day on Sunday.

Naga Chaitanya’s as groom first picture is out