Maa TV anchor Ravi is all set to make his debut in Tollywood with Idi Naa Prema Katha. A few days back, the makers of the film have released a teaser and first look from the film which has received a thumbs response from the audience.

Till now, the movie hasn’t released so the audience started asking Ravi when the movie will hit the screens.

Ravi said that Ours is a small movie if we have a lot of issues to release into theatres. Every year Telugu 200 movies will release, 100 Dubbing movies so overall 300 movies releases in Tollywood by end of every year. Every Friday 6 movies will release if any Tollywood big movies are there on the list. Small movies of any stars will step back to avoid a clash at the box office.

If we do movie promotions we expect to get same profits as well as to release into more theatres to earn more revenue. If the movie release in a number of theatres at least we will get money within one week. 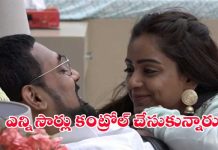