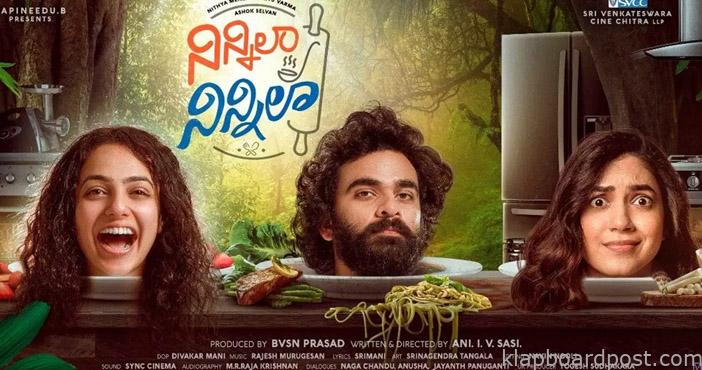 Ninnila Ninnila is a film that not many know about as the makers did not promote it well. The film is out on Zeeplex and, read our review to find out if there is any juice or not in this film.

Dev(Ashok Selvan is a chef who works in London. He has body spasms and scares everyone with his unique behavior. His co-worker, Tara(Ritu Varma) is also one among those who hate him. But they slowly get used to him and find his cooking superb. One fine day, Tara and Dev get stuck in a kitchen and this allows Dev to tell about his past with Maya(Nithya Menen). What is Dev’s issue and how Tara solves it is the story of the film?

Ninnila Ninila is quite high on performances as the entire lead cast does an amazing job. Ashok Selvan leads from the front and does a superb job in his role of a person who is obese and has spasms. His Telugu dialogue delivery and diction are also very good. Nithya Menen is also good in her role which is the backbone of the film. She is lively and is shown as the one who is fully in love. Ritu Varma looks stiff but the way she goes about doing her role in the second half is superb. Her emotions are on point.

The film has a good storyline and is showcased well in the end. But for the audience to know why the hero is behaving like that, one has to sit through the lethargic first half. Scenes related to the restaurant business featuring Nasser are so boring that you get frustrated. The film has an old-school romance but the manner in which things are unleashed is so boring.

There is nothing much happening in the entire first one hour which also tests your patience. The visuals, BGM, and the last 15 minutes are good and comes through as a novel narration but the rest of the film is a boring tale. It tries to be way too poetic but fails in its approach. It is a good watch for OTT where you can pause and watch the film. In a nutshell, Ninnila Ninnila is a dull romantic drama that has only glimpses of creativity and nothing else.