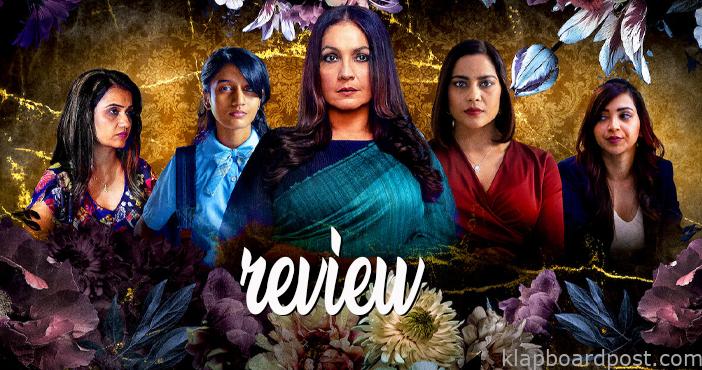 Pooja Bhatt has made her entry into the OTT world with the controversial show Bombay Begums. Read our review to know if there is any juice in the show.

The show is based around a bank named The Royal Bank of India. Rani Irani (Pooja Bhatt) is the new CEO and does not want to let down the bank and is trying hard to stand her position. Fatima Warsi (Shanaya Goswami) is Rani’s assistant who is stuck between work and her marital life. On the other hand, is Laxmi Gondhale (Amruta Subhash) an ex-prostitute who wants a loan from the back to start a new life. Then, there is Ayesha (Plabita Borthakur), who wants to make it to the top position in the bank. All these stories in the bank are connected and show what each of them goes through individually.

Every story has a dark side and that is nicely brought in by Plabita Borthakur. Amrutha Subash is superb as the ex-prostitute and brings a lot of weight to the show with her emotional performance. In all this, the worst part is about a 12 old year girl who is waiting to get puberty so that she can sleep around with guys. This aspect makes the show sick

Bombay Begums is a show which deals with the lives of women who lead ambitious and individual lives. They can get to any extent to get what they want. For that reason, the director has showcased them in a bold manner. Each of the women is not at all concerned about sleeping around with others by cheating their partners. All they want is success in life.

This aspect looks good on paper saying the women lead liberation and can do anything to achieve it. But there is a line for everything. The show has superb politics that can be handled with the bank and lives of every woman. But the show focuses more on the women losing their morale and sleeping with others just at the drop of a hat.

Even when all this is going on, husbands and people in the relationships do not have any issues, The drama is good and twists are brought nicely but there is no moral value or realism in the show. In a nutshell, the good performances are marred by some shoddy and tack conduct of the women in the show.

Bottom Line – Has no moral value