‘Gatham’ is an Indie film that has been grabbing the attention of the audience lately. Featuring a new cast, the film was made with a minimum production cost. The film unit planned for a theatrical release but unfortunately, they had to release it on Amazon Prime Video due to the COVID-19 pandemic. Rakesh Galabhe, Poojitha Kurapathi, Harsha Prathap, and Bhargava Poludasu played the leading roles in this movie. Directed by a newcomer Kiran, ‘Gatham’ is produced by Bhargava Poludasu, Harsha Pratap, and Srujan under Offbeat Films And S Originals. Plot:
Rishi (Rakesh) wakes up from an accident and forgets his past. He goes on a trip with his girlfriend Aditi (Poojitha) and tries to meet his father. But, on their way, they meet a middle-aged man Arjun (Bhargava) who is in need of help. Rakesh decides to offer him help and shelter. But, Arjun’s son Harsha (Harsha) tries to force himself on Aditi. The frightened couple tries to run away. But, Arjun doesn’t let them go. The rest of the film’s plot is all about what the couple did to save themselves.

Performances:
Despite being a newcomer, Rakesh Galabhe did a good job of essaying the lead role. The young actor earlier did a lot of short films that grabbed the attention of youth. Rakesh has finally scored a hit with Gatham which can be a showreel for him in grabbing many more exciting projects. Though he has done some rookie mistakes, Rakesh is certainly ana ctor to watch out for. Bhargava also breathes life into his character and became one of the plus points for this film. Poojitha Kurapathi is good in her role. Harsha Pratap also delivered a decent performance. The rest of the actors also made their presence felt. Most of the actors in the film are first-time actors. 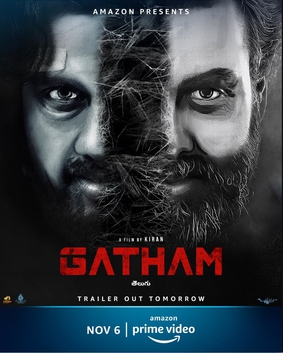 Analysis:
Gatham is a psychological thriller made on a shoe-string budget with a restricted team. A bunch of passionate filmmakers joined hands for this exciting film that is doing noise in the industry ever since the trailer has come out.

Director Kiran did a great job with his amazing writing skills. Despite having so many limitations, Kiran succeeded in giving so many surprises in the screenplay. The movie has a regular revenge kind of plotline. But, Kiran has succeeded in making it in an interesting manner with his writing.

The movie stars off in a curious manner. The way the director introduced the lead characters is pretty much interesting. The film takes a turn as soon as the lead pair cross the path with a psychopath. Each and every scene has succeeded in carrying suspense and there are so many twists and turns in the film which will keep us hooked to the film. The middle portion of the movie could have been better and some of the scenes felt rushed which became one of the minus points in the film.

The production values are decent considering that it is a low budget movie. The music by Sricharan Pakala’s background is extremely captivating. His background score also helped to hook the viewers. The technical team produced a very good output for the film.

Despite having a few shortcomings, the movie still manages to impress. Gatham would have been even better if made with a noted star cast and more budget. All in all, ‘Gatham’ is a thrilling movie that is good in parts.

Meka Suri 2 Review – An unnecessary sequel for an average...