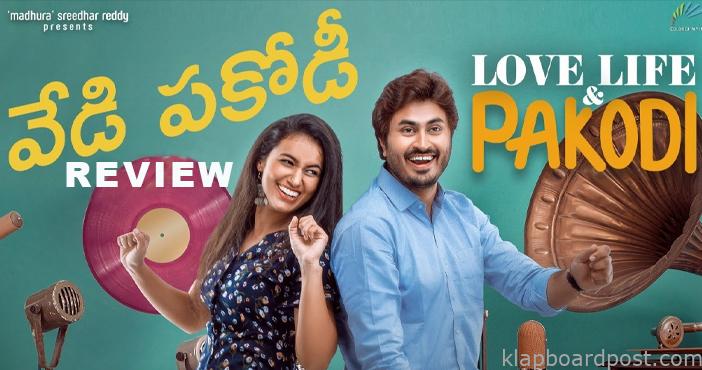 A bunch of films released yesterday and made the theatres quite busy yesterday. Today, a small film called Love Life and Pakodi has made its way to the multiplexes. Read our review to know if the film is even worth watching on the big screen.

Arun(Bimal Kartheek) is an IT guy in Bangalore and lives alone. He meets Riya(Sanchita Poonacha) through a common friend. This is the time, Riya is going through a bad break and even gets an abortion. Arun comforts her and in the process gets physically involved with her. Time passes by and Arun finds out that he has feelings for Riya and proposes to her. But shockingly, Riya says she is happy with the physical relationship and asks him not to complicate things. In such a situation, what does Arun do is the crux of Love Life and Pakodi.

The lead pair is quite new but does a decent job in their respective roles. Bimal Kartheek is shown as this silent guy who does not beat around the bush. He performs to the best of his capabilities but is made to look so simple and naive as if he is going through a lot of stress.

Heroine Sanchita is bold, vulnerable, and gutsy. She is the on-your-face type and holds the drama to an extent with her solid performance. If not for her, the film would have been even disappointing. The actors who played the roles of a mother and father of the lead pair are sleepwalking in their roles and do not add any value and make the proceedings so silly.

Love Life and Pakodi is about modern relationships and how the youth is not interested in settling down and just have fun. The film starts with the hero revealing his various small-time love stories which he had over the years. This aspect is narrated so nicely. Then, the heroine is introduced in a different manner and the way she is brought into the hero’s life is also quite bold.

The modern thought process and the hero respecting the heroine’s bold nature and past are also shown in a mature way. But once they get together, the drama ends and there is no scope for romance. Firstly, there is no chemistry between the lead pair. All they do is have sex, smoke weed and get on with their lives.

The moment that ignites love in the hero’s heart, the way he confronts the heroine, all this looks so forced. There is no conflict and even though there is one, that is not treated well. The film has some good music score but the songs are also not shot well. It is hard to understand why so much English is used in the film. You can barely count how many Telugu words were used.

But the film has some good points when the parent angle is introduced. One thinks, this angle will make things interesting but that is also not handled well at all. Such films have good scope for drama, but the director loses the grip and makes the film like a documentary. In a nutshell, Love Life and Pakodi is a film that is bold but fails to evoke any emotion.