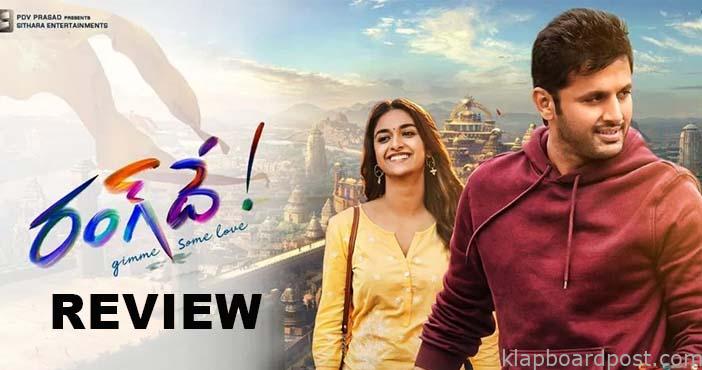 Rang De has been promoted a lot from the last few days. The film has Keerthy Suresh and Nithin as the romantic pair and is now playing on the big screens. Read our review to know if the film has any juice in it or not.

Anu and Arjun played by Keerthy Suresh and Nithin are neighbours and close family friends. Anu loves Arjun but he does not. To escape the marriage fixed by elders, Anu kisses Arjun in front of everybody and gets her wedding stopped midway. Upset parents have no choice but to get the two married. This starts a new love and hate relationship between the two. How will they patch up is the whole story of Rang De.

Rang De is Keerthy Suresh show all the way. She has the best role and dominates Nithin in every which way. Keerthy gets to play a lover, wife, and mother in this film and she was superb.

Nithin is like just just another addition to the film in the first half but gets more meat in the latter part and he too does well. Vennela Kishore and his comedy is also good. Naresh is quite good and so was Rohini as a single parent. Old actor Vineeth had a small role.

By the trailer itself you can understand what the story of the film is going to be. Rang De is all about the love and hate relationship of a couple who are forced into a marriage. This is established quite well in the first half with neat comedy, songs and drama.

Keerthy Suresh and her track looks perfect but the way Nithin is forced into the relationship looks a bit fake. But all this is pushed aside by decent comedy and strongng emotions. The music by DSP is good and PC Sreeram’s camera is a big asset.

The film gets a bit slow and serious in the second half but once the pregnancy angle is brought in things make a lot of sense. The film has many predictable scenes and story wise there is no novelty. But director Venky Atluri manages things well with his crisp narration and does not bore you.

In a nutshell, Rang De is film that has no surprises or great stroy to watch for but the scenes are light and emotion is handled well making it look neat and watchable.