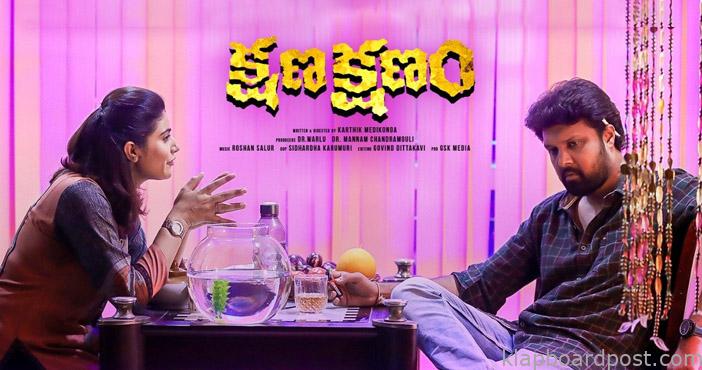 Arjun Reddy fame Jiah Sharma and Uday Shankar star in a serious drama called Kshana Kshanam. The film is already out in the theatres and, read our review to know if the film has any juice to savor it.

Satya(Uday Shankar) and Preethi(Jia Sharma) are two orphans who tie the knot. But after a while, they start getting issues in their marriage and decide to separate. This is the time, Satya gets into a dating App and meets Maya(Shruthi Singh). She calls Satya to her home to have fun and when an excited Satya reaches there, Maya is killed. Who killed Maya and how will Satya escape this case is the basic crux of the film.

Uday Shankar works hard on his role as a desperate guy and wins with his emotions. From the time he is caught by the police for a murder case, Uday has showcased good acting. But the main credit should go to Jia Sharma, the Arjun Reddy girl. She is top-notch and gives a rocking performance. She gets the good scope to showcase her talent and the young girl makes full use of it and does well. Musician Koti plays a lawyer and he is good. Raghu Kunche was also impressive

Already, the plot is water-thin and upon this, the execution is not that great. The director has wasted so much time to establish his lead actors that there was no need for that absolutely. Because of this, the runtime is eaten and the film becomes lethargic for the audience. If this was not enough, the songs come and suffocate you.

The writing is not that great and work should have been done more on the scripting stages to makes things work. The twist that comes during the end is good but does not hold your attention for what is showcased from the begining. So, in a nutshell, Kshana Kshanam is a film that has an ordinary story and ordinary execution.

Fabulous Lives of Bollywood Wives Review – Not a Fabulous show...