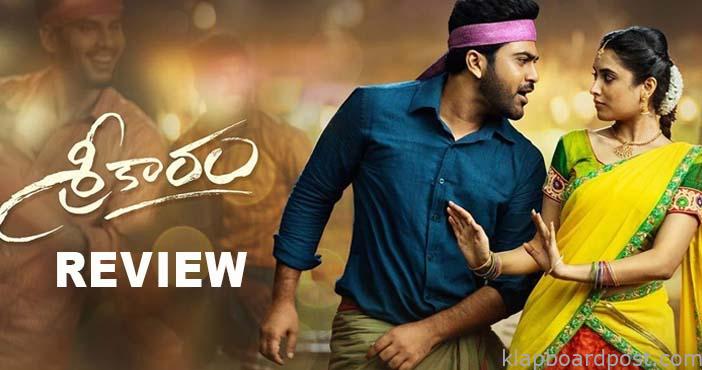 It has been three years since hero Sharwa has scored a hit. So, he has pinned all hopes on Sreekaram that is based on farming. The film is out along with other noted films like Gaali Sampath and Jathi Rathnalu. Read our review to know if the film has any juice in it or not.

Karthik(Sharwanand) is a middle-class guy who works as a software engineer. One fine day, he quits his job and heads back to his village in Tirupathi to take up farming. When a young guy takes up such a brave decision, what kind of problems does he face and what message the film leaves for us is the basic crux of Sreekaram.

Sharwa is a star performer and he is known to give many subtle performances over the years. In Sreekaram, he does so well in the role of an educated farmer. He does not go too loud or is subdued but gives the right expressions. In all his emotional scenes, Sharwa delivers superb dialogues. Priyanka, the heroine has nothing much to do and is the weak link in the film. A better heroine would have helped the film.

But it is Rao Ramesh who is the real star of the film. He plays Sharwa’s dad and does so well. His outbursts, dialogues about farmers, philosophy in life, the noted actor has done so well to bring out these emotions. Comedian Satya is getting better with each film of his.

The film has a very predictable line and that is shown from the teasers as well. The manner in which the film starts is also good. But the love story brings boredom into the film. The love track is tacky and the lead pair share no chemistry at all. But things change when the actual drama starts and the film starts to deal with the plight of the farmers.

Until the interval point, the emotions are on point and the director neatly narrates the scenes with good emotions and a social message. The interval bang is also set up nicely. But the moment the second half starts, the film becomes a bit more preachy. The way farmers get back into farming and how they get over their issues has been showcased in a very easy manner. That is not the case in real life.

The songs are good and the editing is crisp as there is not much lag in the film. The film has good emotions but the narration is formulaic and routine. The climax also has been ended on a simple note and does not give that kind of an impact. In a nutshell, Sreekaram is an honest attempt and has good emotions for the most part. The message given is nice but after a point, it becomes formulaic and gives the audience a feeling of dejavu.

Sita review: Kajal is the only saving grace