Everything seems perfect in the marital life of corporate employee Sandeep and his wife Shruti until the latter is found dead at her house on her wedding anniversary, under mysterious circumstances. The evidence relating to the incident point the finger towards Sandeep, who however claims he’s innocent. His friends and beloved stand by Sandeep’s side in the dire hour and genuinely believe he has nothing to do with her death. The cops are however adamant that Sandeep is a prime suspect in the case and leave no stone unturned to nab him. Sandeep is on the run to prove his innocence. His trusted aide Khaleel comes to his rescue and so do his mentor Baba and friend Rosie. Who must have killed Shruti after all?

Aha’s first web film Run fills the vacuum of a good murder mystery that the Telugu digital space has been lacking all along. The director Lakshmikanth Chenna sets up a racy, focused narrative spanning an hour and a half where a viewer is left gasping for his/her breath. There’s enough mystery in the setting, the film (true to its title) is always on the move (and has a purpose to it) and the room for cinematic liberty too is very minimal. The story is layered well and the timing of the twists at the right junctures sustain the film’s tense vibe effectively. Though Run may have done a better job in lending a balanced perspective of how cops arrive at a suspect during an investigation, it gets most elements intrinsic to the thriller genre right. 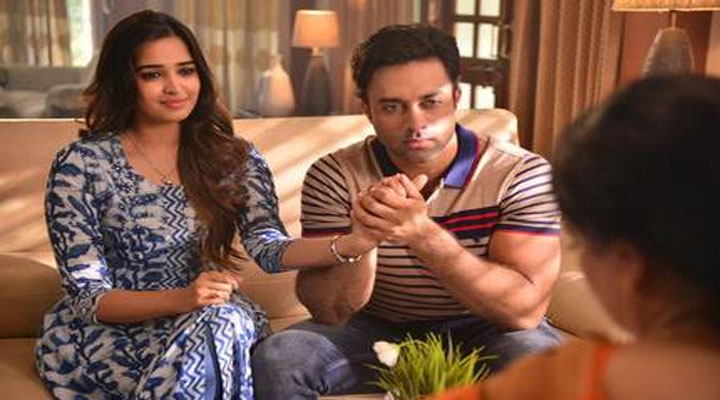 The film doesn’t waste much time in getting to its core point. The storyteller sets up a picture-perfect paradise where nothing could go wrong and jolts us with the death of a protagonist that unearths a can of worms. The biggest advantage with Run is that it does away with a quintessential flashback block. There are only a few flashes of Sandeep’s past and their possible link with the death of his wife. Though the narrative keeps throwing intermittent hints about the culprit, the director and the writer are successful in being one up in the guessing game always.

Run’s execution may not boast of the finesse of many thrillers that streaming enthusiasts may have been exposed to. Not all action sequences and chases give you that adrenaline rush. As is the case with most Telugu films, it gets dialogue-heavy beyond a point. The detailing, at times, remains sketchy. However, this is not to undermine Run’s riveting narrative. It draws you into the film quite organically. The final revelation is where Run scores a few brownie points too. The efforts taken to explore the psychological dimension in a murder mystery lend it a novelty.

Run is a terrific showcase for the versatility in Navdeep that most Telugu films have failed to capture. He does everything to get a viewer to empathise with the plight of a man who’s suspected to have killed his wife. He particularly excels in segments that explore the greyer shades of the role (with a swagger you may want to call it) where he’s trying hard to fight his inner demons. Run may not have been as watchable without the conviction of a performer like Navdeep.

Pujita Ponnada is mostly portrayed in the past tense in the film for obvious reasons and she packs a punch within the limited screentime. It’s good to see Anandam, Yuvaraju actor Venkat back in action again. Kireeti Damaraju is impressive in a role where he thankfully isn’t the third wheel in a relationship and that alone deserves credit. Singer Kousalya makes a surprising debut in a brief part and she doesn’t disappoint. The film has a host of supporting actors in the form of Amit Tiwari, Bhanu Sri, Madhunandan, Shafi and Padmaja Lanka who provide credibility to their short-lived yet crucial roles.

The background score of the film is more or less loud. There are several instances through the film where an underplayed score could have added greater value to the sequences. The editing is sharp and fits the needs of the genre. Sajeesh Rajendran, the cinematographer, provides a visual fillip to the crisp narrative with his flashy frames that matches the campy tone of the film. The writing is devoid of clichés and is fresh, though better detailing could have lent it more flourish.

Run is a good one-time watch and there’s enough ammunition in the mix for a pulsating sequel.