The magnum-opus film, Sye Raa Narasimha Reddy pre-release event happened on a large scale at LB Stadium. The event witnessed Pawan Kalyan sharing the dais with Chiranjeevi and Ram Charan after 10-long-years. The event witnessed who’s who of Tollywood gracing the event. 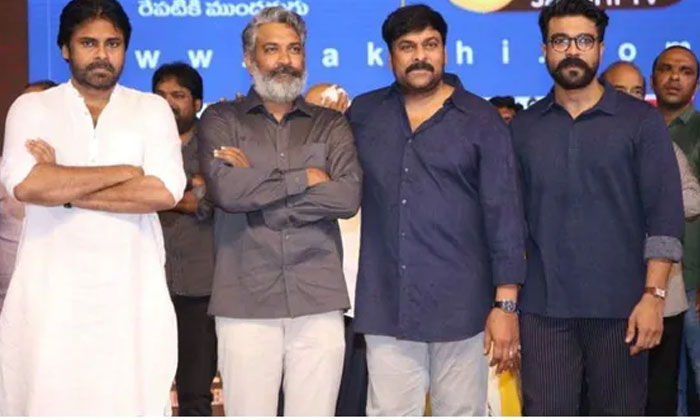 Meanwhile, Chiranjeevi’s speech has become the highlight where he thanked SS Rajamouli. He said, “Thanks to Rajamouli for showing us path to make this kind of huge films. He created market for our Telugu films Nation wide. Charan suggested Surender Reddy as director and he completely utilised this opportunity. (sic)”.

Meanwhile, Rajamouli in his speech wished the team best. He said, “Thanks to My hero Ram Charan for bringing Paruchuri brothers long time effort on the large screen. It’s very hard to make this kind of films. Blessings of Narasimha Reddy garu will be always with this team.”

Pawna Kalyan who was the cynosure of the event thanked Charan for making this magnum opus film which he couldn’t do. He said,  “I didn’t get the opportunity to make this kind of epic film with my brother Chiranjeevi garu but Charan made it possible with no other thoughts. Today our freedom is only because of many fighters who sacrificed their lives.”

The film Sye Raa is about an unsung hero, first freedom fighter – Uyyalawada Narasimha Reddy. Set in  1880 era, the trailer has shown us the glimpses of the grandeur of the era. The makers have paid minute details with the things set in the era. It is learnt that so far Rs 45 crore has been only sent on the VFX and special effects.  Sye Raa is all set for a grand release on October 2.