Helmed by Sukumar also features Samantha as a female lady in the film along with Anasuya and Pooja Hedge in the pivotal roles.

Speculations are rife that, Allu Arjun has given a story for Cherry. An ongoing report suggests that, The main concept for the film was suggested by Allu Arjun to Sukumar. Sarrainodu star was busy in selecting the scripts for other stars in that he liked the theme. Arjun said it would be good if we make the script according to village environment. Since then, Sukumar started working on the script and narrated it to Cherry then it went on cards it seems.

However, an official confirmation about the same is awaited. Meanwhile, Cherry is currently busy filming Chiranjeevi’s next flick Sye Raa which is on floors. 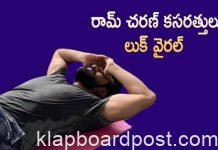