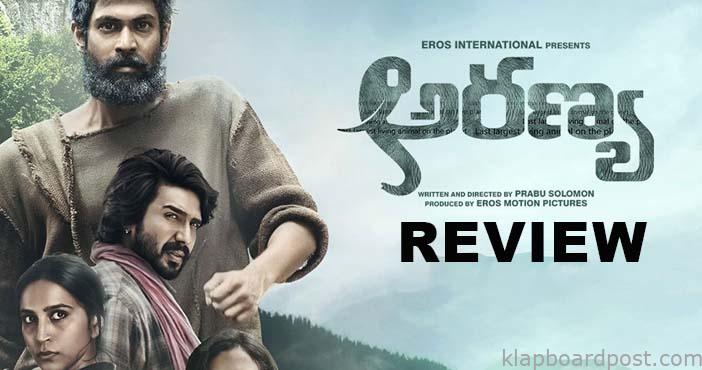 So much was being said about Rana’s Aranya as it was in the making for over two years now. Read our review to know whether the film has enough juice in it to watch it on the big screen.

Narendra Bhupathi(Rana) lives in the Chilakalakona forests in Vizag and his only aim is to protect the wildlife. On the other hand, a corrupt forest minister(Ananth Mahadevan) plans to build a mega project in the jungle. For this purpose, he builds a 60 km wall to prevent the elephants from entering the project site for drinking water. As expected, Rana enters the scene and saves the wildlife. How does he do that is the basic narration.

Rana is the life and soul of the film and he does superbly as the man who is fighting for the animals. Acting-wise, Rana has come a long way in his career and the proof of it is seen in Aranya. His body language, dialogue delivery, and expressions are different from regular films and he does so well.

Vishnu Vishal is wasted in his role and he too looks lost in the setup. In many scenes, you get a feeling that he is sleepwalking in his role. The main villain, Ananth Padmanabhan is pretty good and does well.

The story of the film is really different and has a good conflict point as well. But the narration plays a spoilsport here in the thriller. The film starts on a good note and the conflict is also brought in well. But from there, the film goes down in the second half.

The director brings in too many characters one after the other and this creates chaos in the second half. Because of all this, the climax gets diluted and makes no sense. The music and camera work are just amazing and bring a good effect to the film.

The performance of Rana is the one that keeps the audience engaged here and there. In a nutshell, Aranya is a film with good intent but the inexperienced direction and silly second half spoil the fun of what could have been a good thriller.