Rebel Star Prabhas’s Saaho is the most awaited film; it also makes special for the fans as it is his first film to be released post-Baahubali. The makers of Saaho have been leaving fans updated about its latest activities thorough post on social media, but the big question looms large about the impending release date. And, the good news is that filmmaker Sujeeth Reddy has finalised the film for release in April 2019. It is learnt that makers have pinned April due to sentiments which had worked in the past too. Trade analyst and film news tracker Ramesh Bala confirmed the news as well.

Meanwhile, reports have emerged that after wrapping up Saaho, Prabhas, willl soon join the sets for his next film with Jil fame director Radha Krishna Kumar. A customary muhurat ceremony will be held soon, and the film is likely to go on floors from October. Well, this a big news for all the followers of Prabhas.

Touted to be a period love drama, Pooja Hegde is the leading actress. The film shoot would be held in Europe Hyderabad. Other details of cast and crew are to be announced officially. 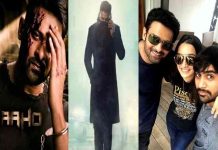 Ageless Beauty Upset with Her Next