A year after the smooch controversy, Philippines President Rodrigo Duterte has again surrounded himself in a row. Duterte during his speech kissed five Filipino women on stage during. Ironically, his longtime partner, Honeylet Avanceña, was also present onstage. Duterte added that the beautiful women helped him “get cured” from being “gay”.

The 74-year-old leader was meeting the Filipino community in Japan on Thursday when he asked for women “volunteers” sitting near to the stage to kiss him to end the event. The first woman giddily hesitated whether to kiss Duterte on the lips or on the cheek and opted for the latter. 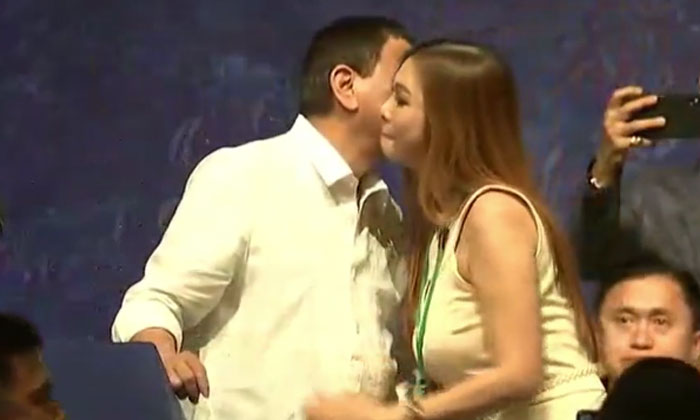 The second woman appeared overwhelmed and close to tears at the opportunity, introducing herself as someone from Davao. She thanked the leader after the brief kiss on the cheek. Duterte pointed to the third woman, who went on stage after she was called. After the kiss, they took a photo together, with Duterte holding her hand.  The fourth and the fifth women also did the same while the press took photos.

During his speech, Duterte said that beautiful women helped him “get cured” from being “gay”, afterwards slamming his critic Senator Antonio Trillanes for allegedly being a homosexual. He sparked controversy in June 2018 when he kissed a married overseas Filipino worker in Seoul during a meeting with the Filipino community there. Duterte was on a four-day visit to Japan that ended on Friday.