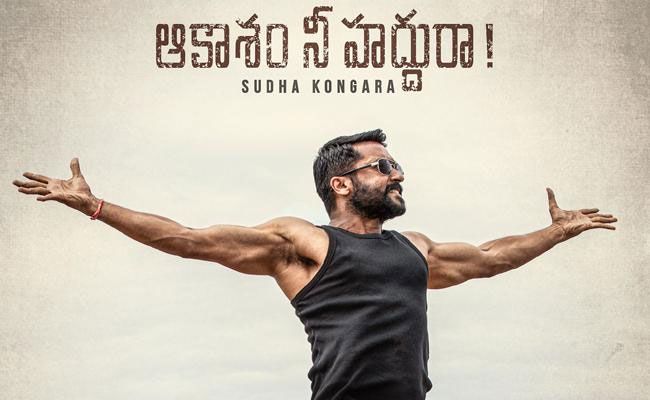 Suriya teamed up with director Sudha Kongara for the film ‘Soorarai Pottru.’ The film was released in Telugu with the title ‘Aakaasam Nee Haddhu Ra.’ The film was supposed to have a release in theatres, but the film’s release was postponed due to lockdown—the film released on Amazon Prime Video.

Plot:
Chandra Mahesh (Suriya) quits Indian Air Force to launch the cheapest Air Line in the country. There are a lot of hurdles in his path to make Air Travel affordable for everyone. How did he manage to dodge all the hurdles to be a gamechanger is the film’s plot.

Performances:
Performance-wise, Suriya is delightful to watch in the film. He has his own way of enacting some scenes that we do not see in every film. But, the actor brought a new Suriya with the film. His body language has changed, and this is one of his best roles in recent times. Suriya played Chandra Mahesh’s character with a lot of homework, and it finally paid off. Aparna Balamurali is a natural actress. She did many films in Malayalam, but this is the first time she paired up with a star hero. She is excellent in the second half of the film. Paresh Rawal, Prakash Belwadi, Urvashi, and Mohan Babu also shine in the film.

Analysis:
Aakaasam Nee Haddhu Ra is the Telugu dubbed version of the Tamil movie Soorarai Pottru. The movie is based on the real-life character GR Gopinath, the founder of India’s cheapest Airline, Air Deccan. Aakaasam Nee Haddhu Ra is not a biopic on Gopinath, but a film based on the book ‘Simply Fly’ and many other stories from the aviation world.

Since a lot of real-life incidents inspire the film, the drama appears real. The realistic situations around which the film was weaved creates a special interest in the movie. The film clearly is a journey of success. The struggles, ups, and downs of Chandra Mahesh, in the process of floating an Airline, is presented interestingly in the movie. The film explores the relationship of a son-father in a unique manner. We do not see that in every movie. The emotional graph of the film is solid, and it drives the film forward.

Director Sudha Kongara does not waste any time and introduces the film’s core theme at the beginning itself. The intention and reason for Suriya’s dreams are established well. A skilled and talented personality who bets high on his intellectual to dream big is the theme of many films. What sets out this film Aakaasam Nee Haddhu Ra is Suriya’s characterization. Taking a break from his regular roles, Suriya reinvented himself as a Rebel in the film. He looked different and behaved differently on the screen. 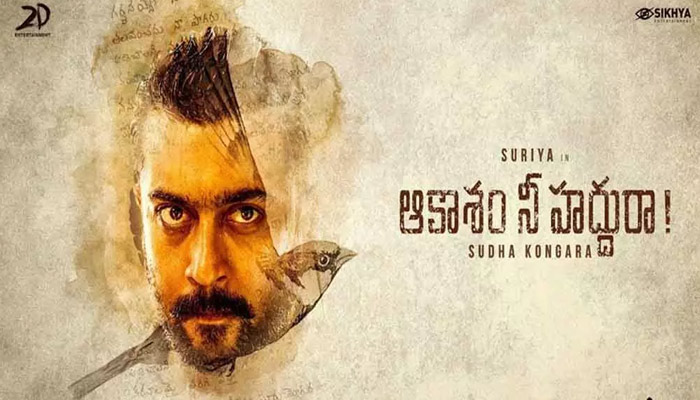 The film runs at a slow pace for a lot of time. The non-linear screenplay technique does not fit for stories like this, but the director decided to make it work. The story could have been told in a much more impactful manner through a linear narrative technique. The antagonist looks very weak in the film. The heroine’s track is impressive. Suriya-Aparna pair also looked good. Some cinematic liberties that the film unit took in the making the film appear unnatural.

The film’s Cinematography is top-class. The camera work adds a lot of strength to the movie. Niketh, who worked for Ee Nagaraniki Emaindi, worked for this film. The songs are good. GV Prakash Kumar has provided a good background score. The artwork is excellent. The film unit took care of dubbing, and the dialogues are written well. The film’s runtime is a minus point.

On the whole, Suriya shines big in this inspiring tale of struggle.