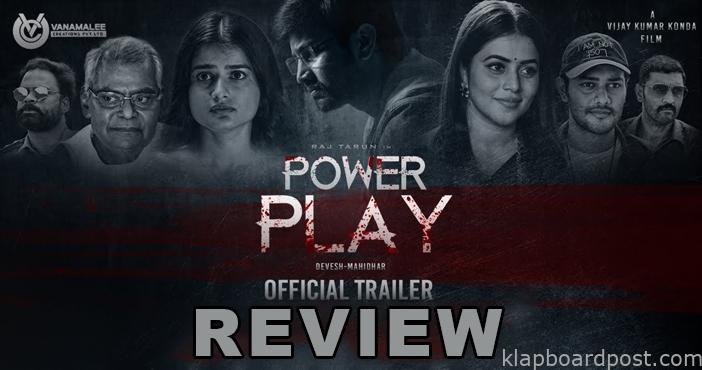 After a streak of flops, Raj Tharun has changed gears for his new film Power Play where he plays a serious role. Read our review to find out if his sincere attempt is worth watching or not.

Vijay(Raj Tharun) draws money from an ATM and gives a bachelor party not knowing that the notes he used are fake. Within no time, he is arrested and his marriage also gets canceled. An upset Vijay decides to prove his innocence and tries for the CC tv footage of the ATM. This is also the time when a would-be CM(Poorna) gets entangled in this case. Who is behind this crime and how Vijay proves his innocence is the story.

The surprise package of the film is Poorna who does the role of a CM’s daughter. One would get a feeling as to where she was hiding all these years. She is superb with her expressions and elevates the scenes once she enters the film. It is a new theme for Raj Tharun and he also did well as a frustrated guy who is trying to prove his innocence. Heal Ingle as the heroine was strictly okay. It was good to see Koata and Dhanraj after a long time. Ajay was routine as the villain.

The story has scope for good thrills but that does not happen at all. The director fails to make use of the good scenes written on paper. There are a few scenes that click. For example, Poorna’s role and her connection to the story are good but the rest of the elements like twists do not impress and help the proceedings.

The BGM is very good and helps the film. But the dialogues, editing, and narration have so many issues. The viewer at any given time does not get the thrill as to what will happen next. The visuals and camera work were good but the making is not that great.

More than anything, the crime scenes have no logic at all. There are scenes that have no connection and they are there just for the sake of it. In a nutshell, Power Play has dull thrills that fail to engage. The only saving grace is the new avatar of Poorna and Raj Tharun.