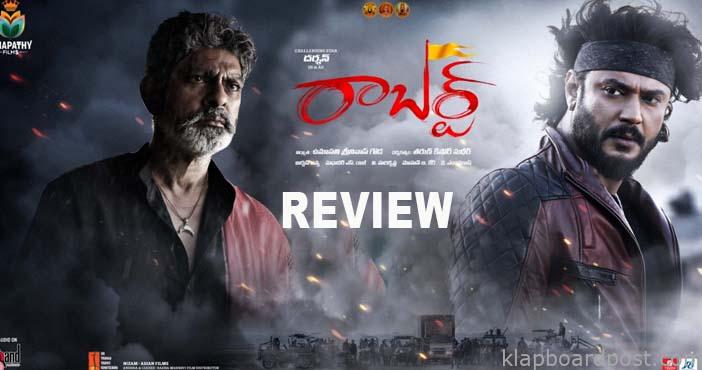 Thanks to KGF so many Kannada films are also being dubbed in Telugu. One such film which is now out is Robertt. Read our review to find out if this film has any juice in it or not.

The film has Rajinikanth’s Basha kind of a setup. Based in Uttar Pradesh, the film deals with the story of Raghava(Darshan) who is making his ends meet in a small-time food business. He crosses paths with an evil politician played by Ravi Kishan and in a crazy turnaround of events, kills him. This leaves the door open to a flashback and now enters Jagapathi Babu who plays Nana. What is Darshan’s past and how is he related to Rana forms the crux of Roberrt.

Darshan has a mass image and does not disappoint his fans. He does what is best for his role and gives an all-around performance in the film. His scenes with his son and the manner in which his flashback is unveiled are so good to see from the eyes of Darshan. Jagapathi Babu is getting repetitive these days with his same look and body language. But still, he manages to do well in Roberrt. The rest of the cast like other small villains do an okay job.

Roberrt is a film that has been made to showcase Darshan as this mass hero. All that is nicely established well in the first half of the film. The action episodes, drama with the child, and the manner in which crime is set up in Uttar Pradesh all look good. The breakpoint also comes at a point when the audience gets excited to see what is going to happen next.

The plot holes in Roberrt are breath-taking. The director greatly compromises the narration to favor the hero adulation in this yawn-inducing film. The entry of Jagapathi Babu makes things interesting a bit but the Telugu audience has seen it all.

The trouble, going into hiding, hero making a comeback as a powerful hero, all our heroes have done this long back and there is nothing much to see here. In a nutshell, Roberrt is a Basha kind of a film for Darshan but not for others who have been there done that.