“We did!!!! Telugu film industry needs more of these non-routine movies. I am telling my mom to go to the threater and watch #ohBaby. Watched it with my friends. Loved the movie. Your performance is crazy! 🤪❤️ Everybody go and watch it in the theaters! Such a feel good movie. #ohBaby ⭐️⭐️⭐️⭐️/5 @Samanthaprabhu2,” this is the Twitter rating by tweep Keeerthana. 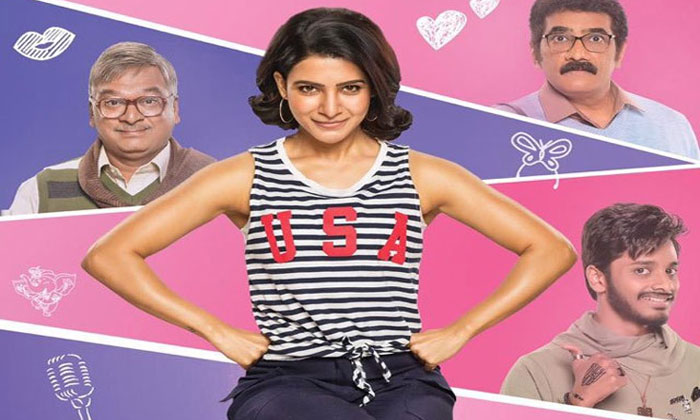 Watched it with my friends. Loved the movie. Your performance is crazy! 🤪❤️

Everybody go and watch it in the theaters! Such a feel good movie. #ohBaby ⭐️⭐️⭐️⭐️/5 @Samanthaprabhu2 https://t.co/BEdBod1mCj

We did!!!! Telugu film industry needs more of these non-routine movies. I am telling my mom to go to the threater and watch #ohBaby https://t.co/LSDk0YqLec

Samantha Akkineni recently said that she would do only good films else sit back at home. And living to the word, she arrived with Oh Baby on July 5th. The film is jointly produced by Suresh Productions, Guru Films and People’s Media Factory and is directed by Nandini Reddy. Starring Naga Shaurya, Lakshmi, Rao Ramesh and Rajendra Prasad in the lead roles, Samantha essays a 23-year-old girl who is stuck with a 70-year-old grandma.

Samantha raised the expectations of the film beginning with the first look, teaser and trailer. The entire promotions were carried with Samantha being the face of it. GIven its hype, the film got released in the US and other places on July 4 while back home it is releasing today.  The US and UK premiere shows have been done and people are raving about it on Twitter calling it Sam’s best career performance and heart-touching climax.

Just done with premier show in US. #ohbaby Ride of emotions. I laughed, I cried. @Samanthaprabhu2 nailed every scene. I wish there is Part 2 with Climax entry of @Samanthaprabhu2 special person. BLOCKBUSTER written every where

One of the users wrote, ” Firsf half is good.. Samantha gave Extraordinary Performance. Senior actress Lakshmi has performed well. Concept, Story is new. Samantha Performance is the main highlight of the film. Especially comedy, Samantha, with a series of tweets, “What a baby?” Let’s see a few more responses via tweets:

Oh what a movie “oh baby” #OhBaby @Samanthaprabhu2 Just watched this crazy yet an important film made for every generation! My grand mom loved it! #OhBabyreview pic.twitter.com/oLZCxkfeAU

#OhBaby woah baby 😍 what a feel good nice movie ! @Samanthaprabhu2 shines as both Swathi and Baby in one of her best performances so far.. go for it !

#OhBaby is well entertaining and so emotional at the same time.
This movie deserves so much success at boxoffice for the heart they have put in making this gem!
Congratulations @Samanthaprabhu2.

There should be no doubt in saying that Oh Baby rides entirely on @Samanthaprabhu2 star power. She carries the weight of the movie on her shoulders. When we speak of the heroine-oriented films, usually, they are restricted to specific terrain. #OhBaby is special among all 👌🏻😃 pic.twitter.com/krOJk9snf5