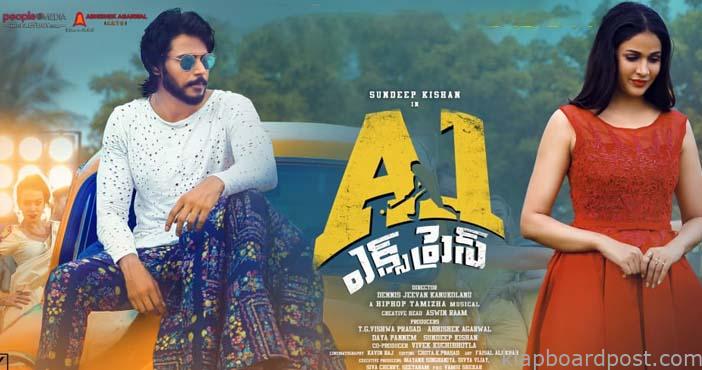 Sundeep Kishan was working so hard to promote his new film A1 Express and finally, the film has made its way to the big screens. Read our review to find out whether the film has any juice in it or not.

The film happens in Yanam and is about a local minister(Rao Ramesh) trying to sell out a prestigious hockey ground that has a lot of history. Lavanya(Lavanya Tripathi) is a local hockey player who gets into trouble. To save her, Sanju(Sundeep Kishan) gets into the heck of things and automatically gets involved in the fight to save the ground. How he is connected and will the ground be saved forms the crux of A1 Express.

Sundeep Kishan is good with a toned body and suits perfectly as a hockey player. He does not overact and stays in his character which is the best part. Sandeep’s aggression, body language, and romance with the heroine have been showcased so nicely. Murali Sharma who plays the hockey coach is sleepwalking in his role and looks lost.

For a change, Lavanya has molded her body language and looks pretty in the film. She also plays her hockey well and ably supports the film. Rao Ramesh is the star of the film and it is only because of his negative act, the film looks interesting. Mahesh Vitta, Posani, and Satya do their parts nicely.

A1 Express is the remake of a Tamil hit that was done by Hiphop Tamizha, who composed music for this film. The film is about this ground and the politics surrounding it. The start of the film is good but the introduction of the characters is too slow. The romance, comedy, and setup look dull. But things pick so well during the pre-interval when Sundeep enters the hockey ground. From there, till the interval bang, the effect is good and the twist is also impressive.

All this is nicely elevated by the solid BGM by Thamiza. The songs are good and nicely placed in the narrative. What works for this film is the drama and emotions that come through the roles of Priyadarshi and Rahul Ramakrishna. This is the time film clicks well. But there are also a few logics that go for a toss.

Murali Sharma is a coach and he does not know about an Indian player like Sundeep, this looks a bit over the top. The film is wrapped neatly but still, you get a feeling that there should have something else in the proceedings. In a nutshell, A1 Express has a good premise but leaves you with mixed feelings and ends as an okayish sports drama.