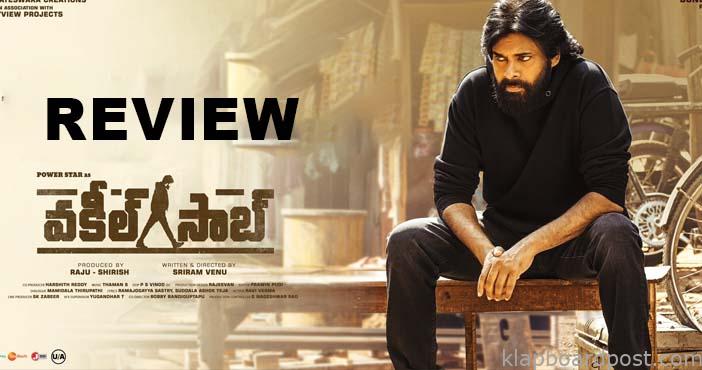 Vakeel Saab is a film that has been promoted quite well by Dil Raju for the last few days. It is out now and read our review to find out if the film has any juice in it or not.

The plot is simple. Three girls played by Nivetha, Anjali, and Ananya get into a brawl with some bad guys and injure one of them. As the injured guy is the son of an MP, he files a case. The girls have no choice but to approach lawyer Satyadev(Pawan Kalyan) to fight their case. But Satyadev has his own issues. Will he leave all those beside and come to the rescue of these girls. That is what forms the story of Vakeel Saab.

Anjali is a natural actress and she does so well in the film. There is one scene where she shows her emotional outburst and this proves her acting prowess. On the other hand, Nivetha is amazing and shows her emotions through her eyes and honest approach.

Anaya does not get much time but she too is good. Prakash Raj is also good and brings a whole believable factor in the film with his intense act. The manner in which Pawan speaks about how girls are looked at in society is very nicely shown.

But Vakeel Saab is Pawan Kalyan’s show all the way. Pawan, over the years, is not known for his performances but in Vakeel Saab, he gets a tough role as a lawyer and does so well. Be it his dialogues or the seriousness in his character, Pawan does so well and impresses his fans.

From day one, we all know Pawan is not the one who will be there from scene one. So, the audience came prepared to see Pawan whenever he comes on screen and enjoy the rest of the drama. The film has amazing setup and is nicely started by establishing the lady characters.

The conflict and how the women face trouble are also brought in so well. But Venu Sriram falls for Pawan’s fans and adds a flashback and brings in Shruthi Haasan. This part looks forced and bores the audience. There was no need for a romantic song and so many routine scenes. This is the time, Pawan also looks out of place.

But the director nicely brings Pawan in form with the interval bang. Once the second half starts, things do not disappoint one bit. You know what is coming at you but the narration of Venu Sriram keeps things gripping. The visuals are good and Dil Raju has not spent much on the film. Dialogues are also impressive.

The main asset is Thaman who takes things a notch higher with his BGM. The emotions, social message, and Pawan’s role are perfectly balanced during this time that the film has many whistle-blowing moments and ends on a very thumping note.

Though the plot of Pink is compromised a bit for Pawan’s fans, the second half does a lot of justice. In a nutshell, Vakeel Saab has good drama laced with a solid social message and when Pawan conveys such a message, things look even better.

Bottom Line- Does not disappoint