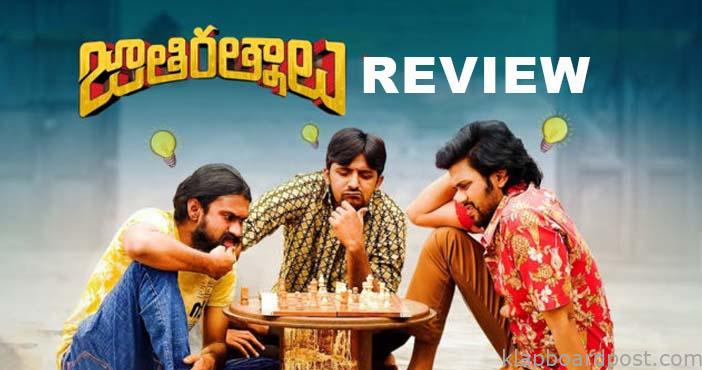 Jathi Rathnalu has been promoted a lot by the makers. This was shown in the advance bookings of the film. It has released today and read our review to know whether the film has any juice in it or not.

Three losers played by Naveen Polishetty, Rahul Ramakrishna, and Priyadarshi land in Hyderabad in search of work. Naveen also falls in love with Chitti(Faria Abdullah) and to woo her, he attends a birthday party which turns things for him. All the three friends get arrested in a murder case and hell breaks loose. How will they come out is the crux of Jathi Rathnalu.

The film is completely dominated by Naveen Polishetty. What an actor he is with full of energy. His wit and humor is what makes this film tick so well. Naveen goes crazy with his dialogue delivery and impresses you completely. Faria Abdullah is very good in just her first film only. The lanky actess has a cute face and her comedy timing is good.

Priyadarshi is amazing in his role. He does not do much but still his eyes evoke good humor. Rahul Ramakrishna was perfect as the drunkard friend who is in his own world. Murali Sharma is too loud in his role. Naresh was okay and Brahmanandam made a splash after a long time.

Jathi Rathnalu is a film where there is no focus on story. It is filled with funny situations and how the actors react to it. The film starts in Jogipet and the characters are established superbly. Each of the guys, their characters is nicely shown.

Once the film lands in Hyderabad, the love story takes centre stage and it is also quite endearing. The fun dilogues, hilarious situations keep the audience on its toes. The film enters the main story only in the interval bang and until this time, the mood is light.

But the second half is a tad dull as the court case, crime angle and the way the youngsters react to the situation looks way too forced and silly. At least during this time, the director should have made things a bit serious. But he keep the mood light and this disappoints the viewers with silly proccedings.

But once again, the film gets into a grip during the pre climax as the fun generated in the courtroom scenes is hilarious with the entry of Brahmandam. Jathi Rathnalu has no story and no emotion. In a nutshell, it is a mad comedy caper with crazy situations. All those who love loud comedy and fun will end up liking it.

Review – Shakeela- A silly and poorly made biopic