Home English Big Stories Review: Kaadali
Facebook
Twitter
WhatsApp
Google+
Pinterest
Ram Charan and KTR gave the film a very good hype and publicity. Now, the film has released all over. Read on to see what it has in store for us.
Synopsis:-
The story of the film is quite simple and is based on the life of Badhavi played who is upset with her marriage not getting fixed. She decides to date two youngsters played by Sai Ronak and Harish Kalyan and fix one at the end. Rest of the film is about whom Bandhavi marries.
Performances:-
The heroine Pooja is seriously not suitable to the role. She looks only good in a few scenes but she did not do any justice to her role and could not carry the strong role at all. She looks lost in the plot and made the film go down. Hero Sai Ronak is okay but looks rigid as his role was written like that. He hams in certain scenes and over acts at places.
But the main recognition should go to Harish Kalyan as he is very handsome and carries all his expression quite well. His timid role also helps matters much. He is a good find for Telugu and is surely a talent to watch out for. The man who did heroine’s father’s role is also good.
Overall Analysis and technical overview:-
The film moves at a snail’s pace and you keep wondering when the film will finally finish. This is quite bad when you see a simple story being stretched to no extent. All the heroine does is flirt with two boys and keep their hopes alive. The only saving grace is the romance shown between these three which is handled okay.
But by the time the second half comes, you are already exhausted and irritated as to why a simple decision is not taken by the heroine. The director who is KTR’s classmate fails in his approach and makes this film a very painful watch for others.
One Libe Verdict:-
Slow, Boring and Outdated 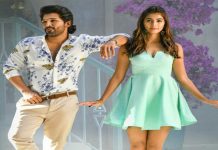