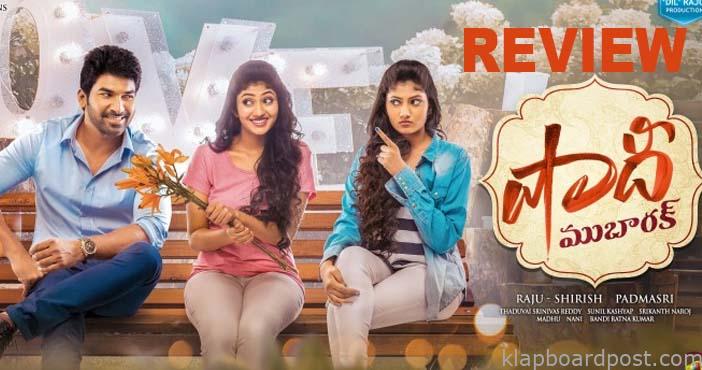 Shaadi Mubarak is a film that was stuck in the cans for so much time now. With a lot of effort, the film has made its way to the silver screens thanks to Dil Raju. Read our review to find out if the film has any juice in it or not.

The plot is simple and is about an NRI called Sunnipenta Madhav(Sagar). He comes back to India in search of a girl and meets a matchmaker who fixes three Pelli Choopulu in a day. But in a turnaround of events, the matchmaker sends her daughter Drishya(Satya Bhama) with Madhav. But things change as the two strangers fall in love and end up marrying each other. How all this is showcased is the basic flow of Shaadi Mubarak.

Sagar is a noted actor and he brings all his experience in place and does well as an NRI. He is neat in his settled role but could have done well in the emotional scenes. The same is the case of heroine Drishya. She is composed and looks good but acting-wise could have been better. Rahul Ramakrishna evokes some laughs but Bhdrama was pretty good in his comedy role.

The film does not have a great story and depends on situational comedy and romance. While the situational comedy looks good in the first half, it drags in the other part. The other dull part of the film is the way the heroine falls for the hero. There is no spice in this and the scenes that showcase her love look forced and silly.

In such stories, the screenplay is a major attraction but things differ here as the scenes are dull and showcase routine emotions. The setup is good and had good scope for emotions but the director did not make use of it and shows repeated scenes time and again.

The songs are dull and the climax part lacks the emotional connect making the film unimpressive in many areas. In a nutshell, Shaadi Mubarak falls flat and has the feeling of the same old rom-coms that you have seen in multiple films.

Manne Number 13 Review – A boring horror-thriller that tests the...