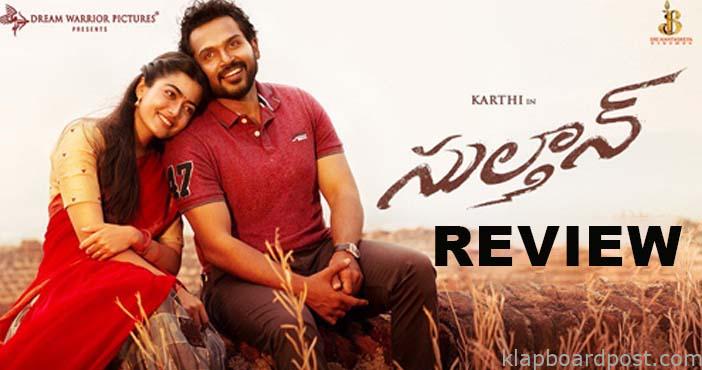 Sulthan is a film that has been promoted quite a lot in the last few days. The film is out now and, read our review to find out if the film has any juice in it or not.

Sulthan(Karthi) is an educated person living in Mumbai. His father(Napolean) is a famous person in Vizag who is supported by 100 crazy henchmen of his. One fine day, Sultha’s father dies and things take a U-turn. The way, these henchmen create trouble is not liked by Sulthan and he decides to teach them a lesson and make them live a happy life. How all this happens is the whole story of the film.

Such roles are a cakewalk for Karthi and he does extremely well in this film. Karthi is solid in his action avatar, oozes charm in all the romantic scenes, and mouths mass dialogues to please his fans. He is like a whole package in the film.

Rashmika makes a good Tamil debut and fits the bill perfectly. Though her role does not have much importance, Rashmika is amazing as the village belle and brings a lot of joy whenever she is on screen. Napolean and Lal do what is required from them. The rest of the cast is Tamil actors and they are okay.

The story of the film is quite routine and does not show anything new. The only change which the director makes here is by adding 100 goons and building a track with them. The manner in which comedy is generated between Karthi and these goons looks good on screen and evokes good laughs as well. But the rest of the thread is from the same template of corporates taking on the village and the hero trying to save them.

The farming angle that is showcased in the film is also nothing great and runs on a predictable note. But Karthi and his spirits keep the film high. The fights, songs, and comedy are good. But the boring scenes and lack of good conflict keep disturbing the film time and again.

The film looks quite rich and boasts super good visuals. The scenes are colorful but there is nothing new that this film has. In a nutshell, Sulthan is a film for the front benchers who want a bit of everything. But for the audience who expect something different, it is not for them.

Bottom Line – Only for the masses