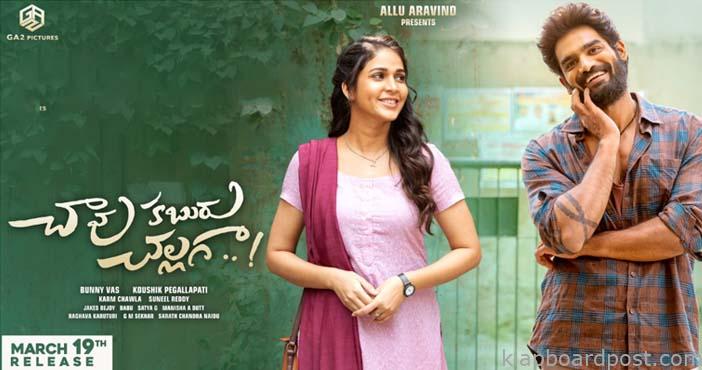 Chaavu Kaburu Challaga has been promoted a lot by Geetha Arts and it has come out today with two other films. Read our review to find out if the film has any juice in it.

Basti Balraju(Karthikeya) is a mass guy who drives a van which carries dead bodies. He falls for a widow played by Lavanya and this irritates her to no extent. But Balraju does not leave her and continues wooing her. In such a time, he comes to know about the affair of her mother(Amani). This brings new tensions to his life. What will he do with his mother’s life and will he end up wooing his lover, you need to know for yourself by watching this film.

Murali Sharma plays Lavanya’s father in law and for the first time, he looks clueless in the film. His role is quite key but is not at all handled well. Lavanya Tripathi is simple as the widow and does not go overboard. She enacts all her emotonal scenes in a perfect manner and one should watch her during the interval scene and she was good.

This is a big opportunity for Karthikeya and he does so well as Balraju. He has got into his role in an impressive manner and enacts his emotions quite well. Karthikeya does well with his body language and this film will surely take his reach quite deep into the audience. He did good in the climax.

Chaavu Kaburu Challaga, the title of the film itself is quite unique and so is the story. A man falling for a widow and that too at her husband’s funeral, how different things can get. This is the basic theme of the film and is established well in the beginning.

The hero liking the girl and she not caring about him is established well with decent humor. But afer a while, the scenes get repetitive and bore the audience. Then the mother’s affair angle is brought in and this makes things interesting.

But in all this, the love story is left alone and this makes things so boring. The confrontation between the heroine and hero is not strong as many romantic scenes go for a toss. The songs are good and the emotions in the climax and it’s justification is good.

But somehow you get a feeling that the film is missing the spark. In a nutshell, this film is not for all and is aimed at the B and C centres. Even for them, the basic elements are not elevated well and make this film a so-so watch.

Bottom Line – Not so engaging